This is the 1313 Steam traction engine from Mamod (model number TE1a Green), a replica model of a Victorian era English tractor engine that comes in black, with a British racing green boiler, and cheerful red wheels. 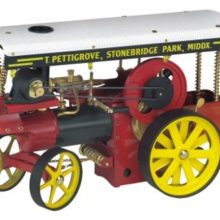 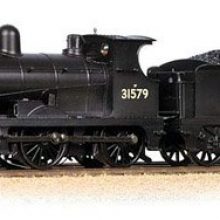 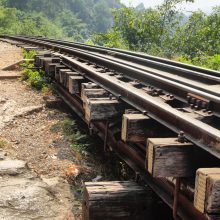 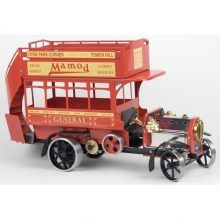 Review: Working Live Steam Mamod 1920’s Red London Omnibus LB1R Oozing in class, this remarkably beautiful London bus throws collectors back to a time gone by. A world renowned icon of England to this day, the red bus of London is forever popular. Mamod does this symbol of London and the history of the British bus justice. Not straying from the real life 1920’s omnibus the model is based on, the LB1R comes in a vibrant red colour, with lovely old fashioned signs painted in yellow and red. The small details of the curved staircase, steering wheel, driver’s seat and engine give this beautiful bus detail, even down to the most minute parts. Each LB1R is made to order from heavy gauge steel and brass. These heavy materials give the finished piece a weight of 3.8kg. The model’s dimensions are: 455 x 285 x 170mm (not quite as big as a real London bus, but big enough to admire without a microscope!) and come with fuel tables, oil and a funnel (everyone knows how annoying it is to get a gift that needs batteries, without batteries in the box. You won’t have to worry about this with the LB1R). No fear of overdoing it, though! The models are equipped with a pressure safety valve. If you’re still worried about the safety of the model, rest assured, Mamod’s switch from old fashioned methylated spirits to solid fuel tablets means that running the London steam bus is safer now than ever. The first time you’ll use the product is simple too! No faffing around, and with this particular model in the wide range of Mamod models available, no assembly is required. Just add water and off it goes. Every single omnibus is hand crafted with expertise in England. This model is a perfect gift for a man who you would ordinarily spend hours pondering over about which gift to buy for them. The LB1R is unique – how many other men can say they were gifted a live working steam London Omnibus? Men who will enjoy this gift in particular are ones who enjoy history and English culture, men who are interested in a range of vehicles, men who appreciate finely crafted models, those who you think welcome a new hobby and last, but most certainly not least, those who are avid hobbyists and would love to extend their collection of exquisite models. Children will also benefit from this little slice of history, but bear in mind that due to the fuel and steam, it isn’t suitable for those under 14 years old to use without adult supervision. Due to its precise craftsmanship and good quality materials, Mamod’s LB1R London bus is made to last, making it a worthy investment. Just as the real London bus has transcended through years of history and time, your own model will bring about years of delight through generations of your family. This is definitely one to be passed down from grandfather to grandson, giving the piece sentimental value, as well as monetary value. CHECK PRICES