Modern battleships have dominated the seas since the industrial era and represent some of the most formidable fighting machines mankind has ever created.

Naval vessels, particularly warships, have long been a fascination for model builders. Anyone can own a car, a motorbike or fly in a plane, but we rarely get the opportunity to even glimpse some of the most impressive vehicles that mankind has ever conceived – battleships. The real life versions of these models are spectacular feats of engineering – gargantuan, awe-inspiring war machines that have been at the forefront of military engagements through out the modern era.

Their model kit counterparts are equally impressive – they tend to come with many more, smaller parts so can be a challenge to complete. But, the final model that is built is a faithful and detailed recreation of famous battleships that will look great displayed in your home. We’ve looked at some of our favourite model battleships below – check them out.

The German Type 1926 Destroyer was a group of six destroyers (also known as Z17 class), built for the German Navy just before the start of the Second World War. They helped the Germans lay minefields off the coasts of mainland Europe and the British Isles, and all but one of the vessels were sunk or scuttled during the Battles of Narvik in 1940.

While this vessel perhaps isn’t the most memorable of modern warships, the model is beautifully detailed and offers a great challenge to enthusiastic beginners and intermediate model builders. With 174 pieces, it’s challenging to assemble and the resulting model makes a lovely little display piece when completed and painted. 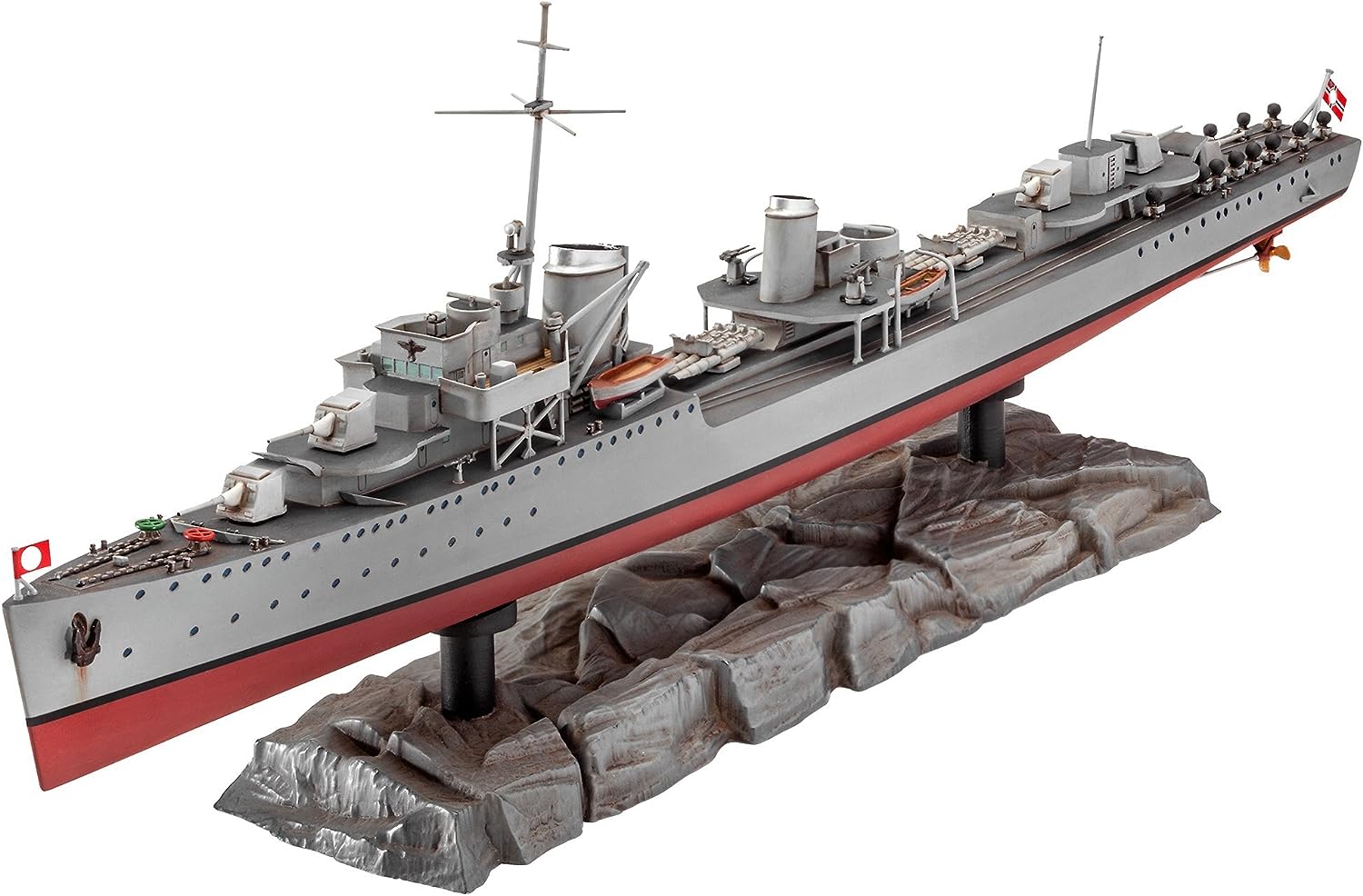 The Queen Elizabeth-class battleships were technological behemoths of their day and part of a group of battleships known as “super-dreadnoughts”. “Dreadnoughts” were named after the Royal Navy’s ship of the same name (launched in 1906) – they were such a leap in technology and power, that the term “battleship” wasn’t deemed to be good enough. Subsequent design improvements led to Navies around the world to create super-dreadnoughts, which were even more advanced, but over time these have again become referred to as battleships.

The HMS Warspite was commissioned in March 1915 and participated in several battles during the First World War, although her duties were generally more focused on patrols. By the Second World War, her age (and similar models), were beginning to show and more technologically-superior vessels were being built. But as with other battleships, she lived up to her reputation and endured shellfire, bombing, mines and ramming, surviving the war to be decommissioned a few years later.

This is a great model for naval enthusiasts. We often think of the immense power and capabilities of battleships, and the Queen Elizabeth-class vessels were, for a time, at the pinnacle of naval warfare. This model comes with around 200 pieces, so will take some skill and care to assemble, but when complete you will have built yourself a lovely piece of naval history. 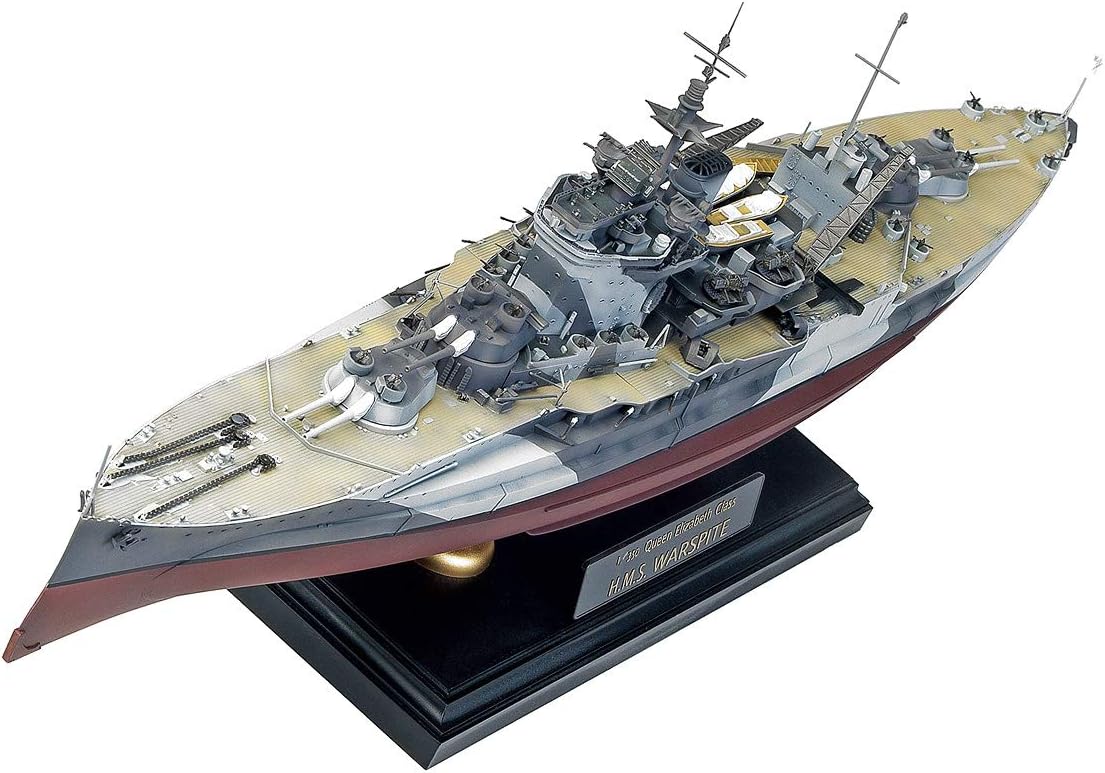 The USS Missouri (or “Big Mo” / “Mighty Mo”) is an Iowa-class battleship built by the US Navy in 1944. It was one of a faster class of battleship, which were build to intercept larger enemy vessels, but could still operate as a ship of the line with slower battleships.

The USS Missouri is perhaps one of the most recognisable modern era battleships as it was the site of the surrender of Japan, which signalled the end of the Second World War in 1945. It’s also been featured in several movies, including the Steven Segal feature, Under Siege and more recently, the sci fi film, Battleships (which, if you haven’t seen it, is a great homage to the place of battleships in the navy, albeit in a somewhat cheesy film).

This model is simpler than the others featured here, with only 27 pieces and the final model sits at only 22cm in length. But this makes it a wonderful little model for beginners, especially movie fans who might recognise it from its appearances on the big screen. 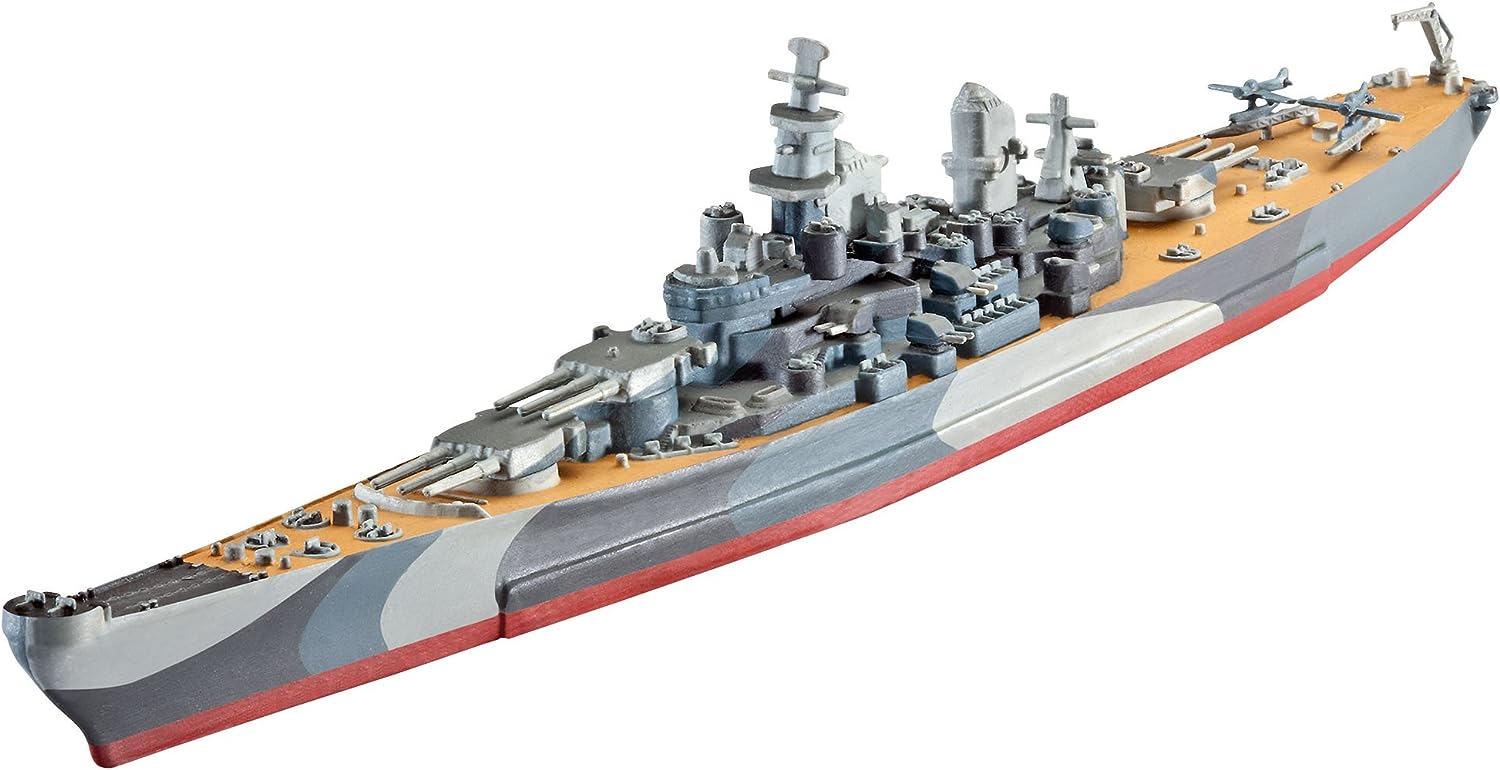 The USS Enterprise CVN-65 was the first nuclear-powered aircraft carrier and the 8th vessel to carry the name Enterprise. Launched in 1961, she is the longest naval vessel ever built and was home to some 4600 sailors. She was present during the Cuban Missile Crisis and well as a number of other deployments through to the end of the 20th century.

Star Trek fans will be familiar with the ships of the same name in the sci fi series. Series creator, Gene Roddenberry filmed the first series in the 1964, which led to the assumption that the carrier was the inspiration for the name of the ship in the series. Roddenberry later corrected this assumption and clarified that the WW2 ship named Enterprise was in fact the inspiration.

This is a great model for naval history buffs and suitable for children. While it does have over 100 pieces, it’s not quite as complex as other models covered here, so could be a good choice for beginners or enthusiasts. 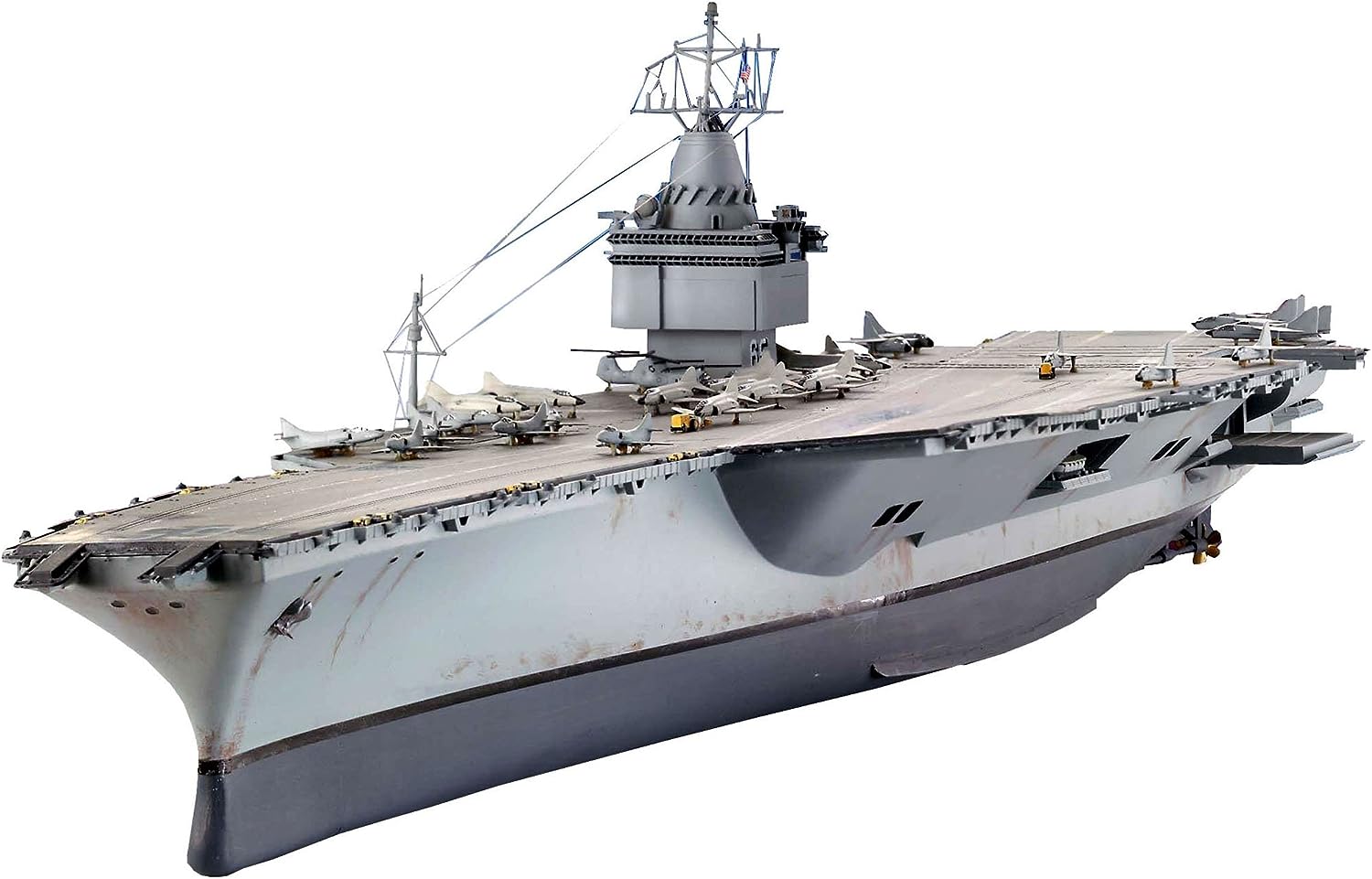 The HMS Invincible was launched in 1977 and was designed to be an anti-submarine warfare carrier who’s purpose was to operate as part of a submarine hunter-killer group. Armed with an array of weapons and equipment, the carrier also sported a flight deck which could launch Sea Harriers or Sea Kings to support the armada’s operations. The HMS Invincible was the flagship of the British Navy in the late twentieth century, before being decommissioned in 2005.

This is another mid-range model that could be good for both enthusiastic beginners and more seasoned model builders. With 122 pieces and a relatively small size when finished, it will take care and precision to assemble, but the finished model is beautifully detailed. 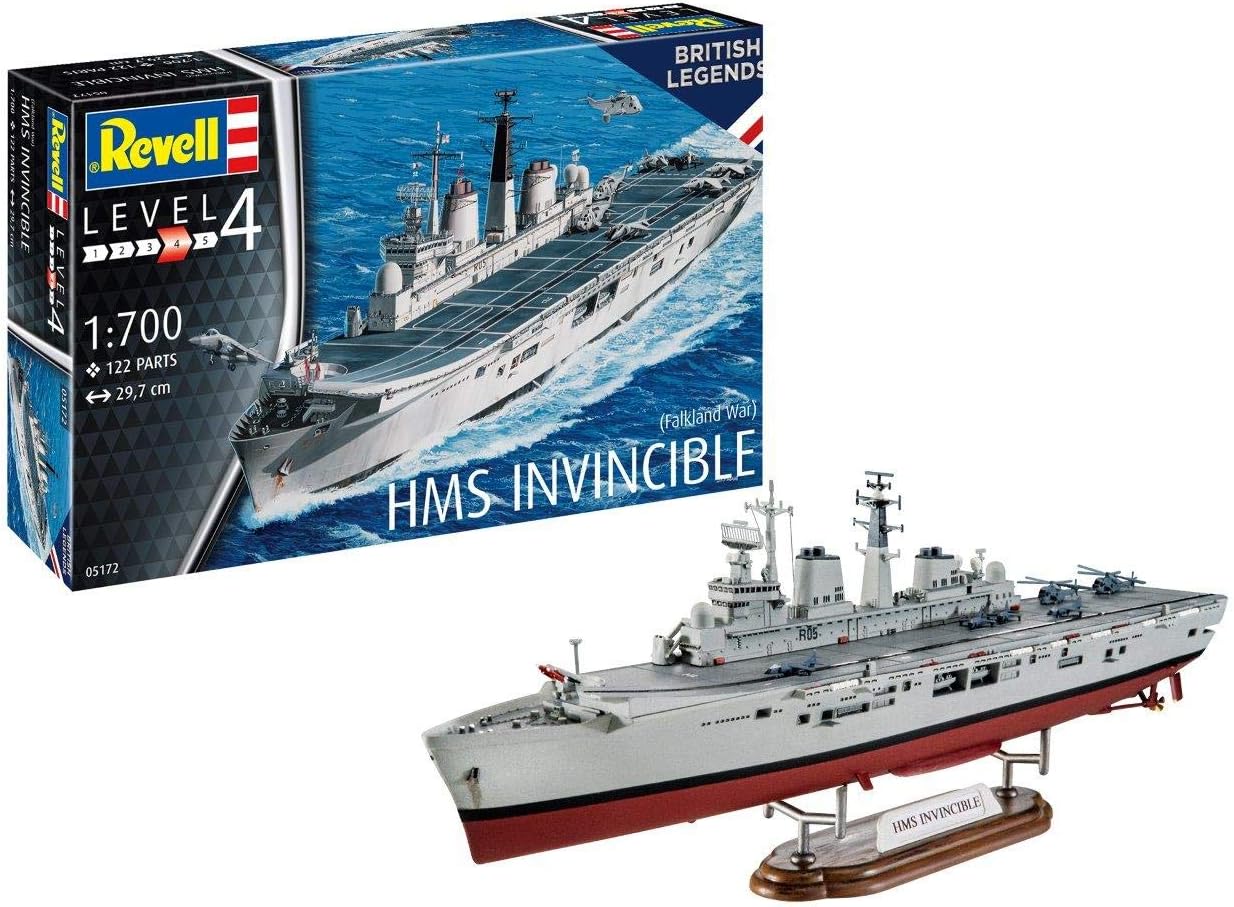 The Russian battleship ‘Gangnut’ was the first dreadnought class ship developed by the Imperial Russian Navy in the early twentieth century, launched a few years after the British Navy launched the Queen Elizabeth-class battleship. This era represented a turning point in naval warfare, where these benemoth machines of war dominated the oceans. Gangnut-class battleships were in operations during both the First and Second World Wars.

This is a lovely model, which is wonderfully detailed and will present a real challenge for intermediate and advanced model builders with over 400 pieces. But, when complete, the finished model will be 52cm in length and will leave you with a great looking model ready to be painted and displayed. 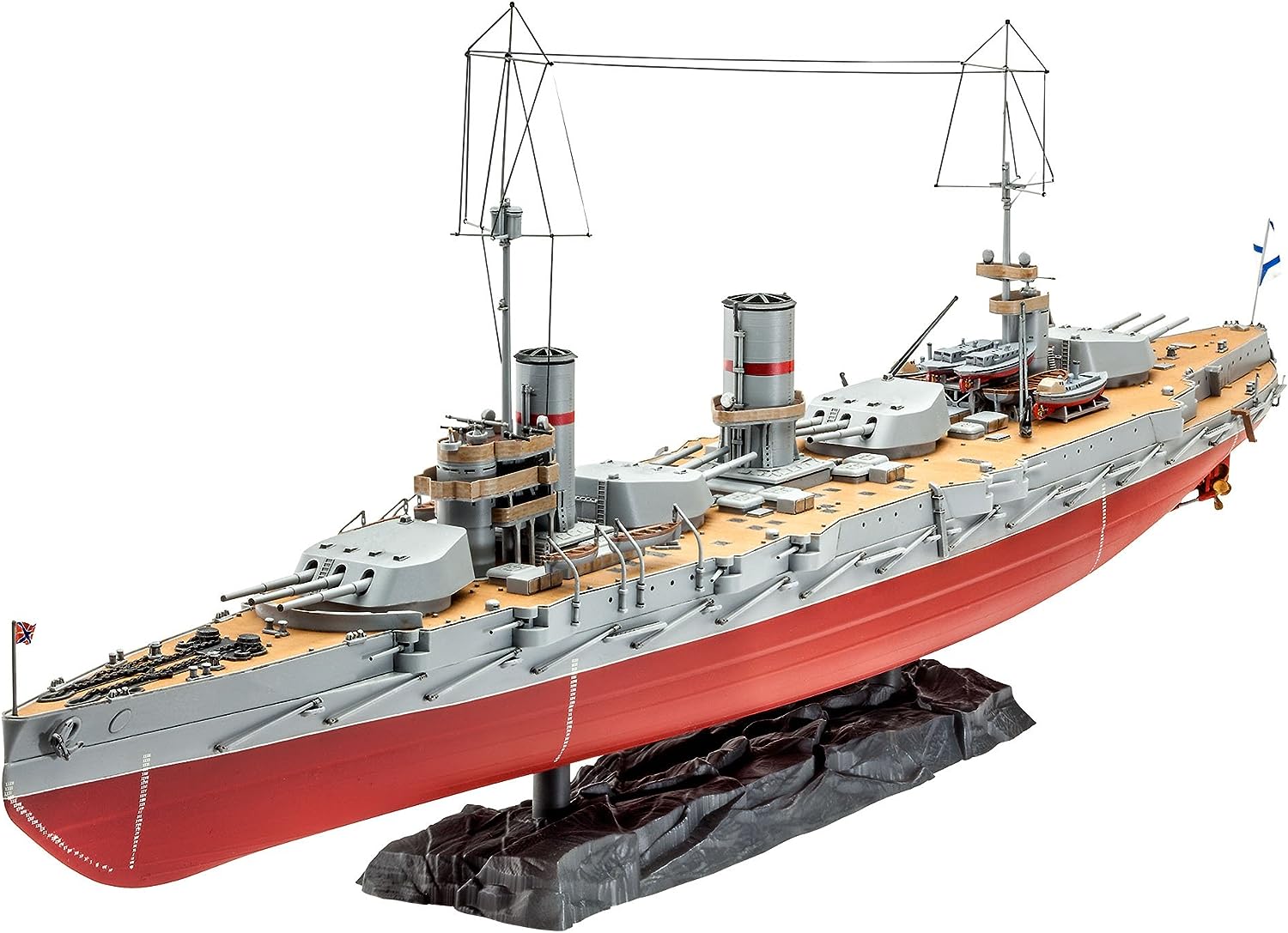 The HMSC Snowberry is a corvette-class warship deployed by the British Navy during the Second World War. Corvette-class vessels are typically the smallest to be classed as a “warship”, and are used for patrolling key waters or escorting convoys. They’re light, faster but carry heavy armaments which means they’re a great reactionary vessel. The HMSC Snowberry served most of the Second World War in the Royal Canadian Navy (on loan from the British Navy), as a tanker escort, protecting critical oil tankers from German U-boats.

This is the most complex of all the model battleships in this guide, with just over 500 pieces. The kit manufacturer, Revell, grade their models on a scale of 1 to 5 (in terms of difficulty) and this is a 5. While it can be completed by children and more amateur model builders, it’s recommended that perhaps you start with a simpler model first. But, for those who have more experience (and a steadier hand), this could be a great challenge for you to get stuck into. 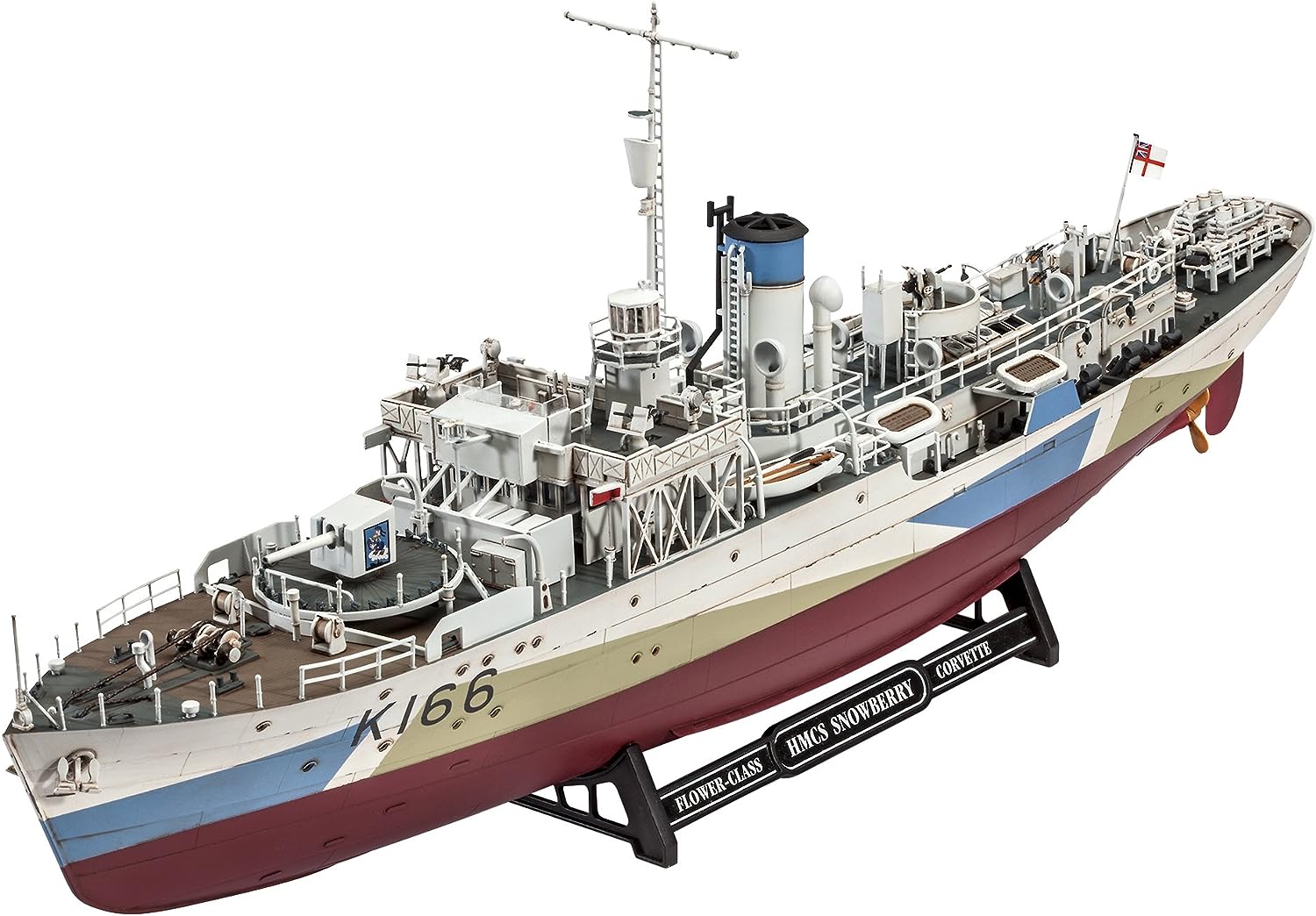 The German battleship Bismark was one of two Bismark-class battleships reconstructed by the German Navy during the Second World War. The ship entered into an engagement with two British vessels, resulting in the sinking of the British battlecruiser, HMS Hood. This prompted a strong response from the Allied forces, with the Royal Navy sending dozens of warships after the Bismark. A few days later, the vessel was critical hit by torpedoes deployed by bombers from a British carrier. The next morning, two British battleships and two heavy cruisers caught up with the Bismark and she was heavily damaged in the engagement – forcing her crew to scuttle her.

This is another advanced model – this one has 295 pieces, so again, aimed at more intermediate or advanced model builders. But it does have an interesting backstory and the final model is detailed, making the time and effort to assemble well worthwhile. 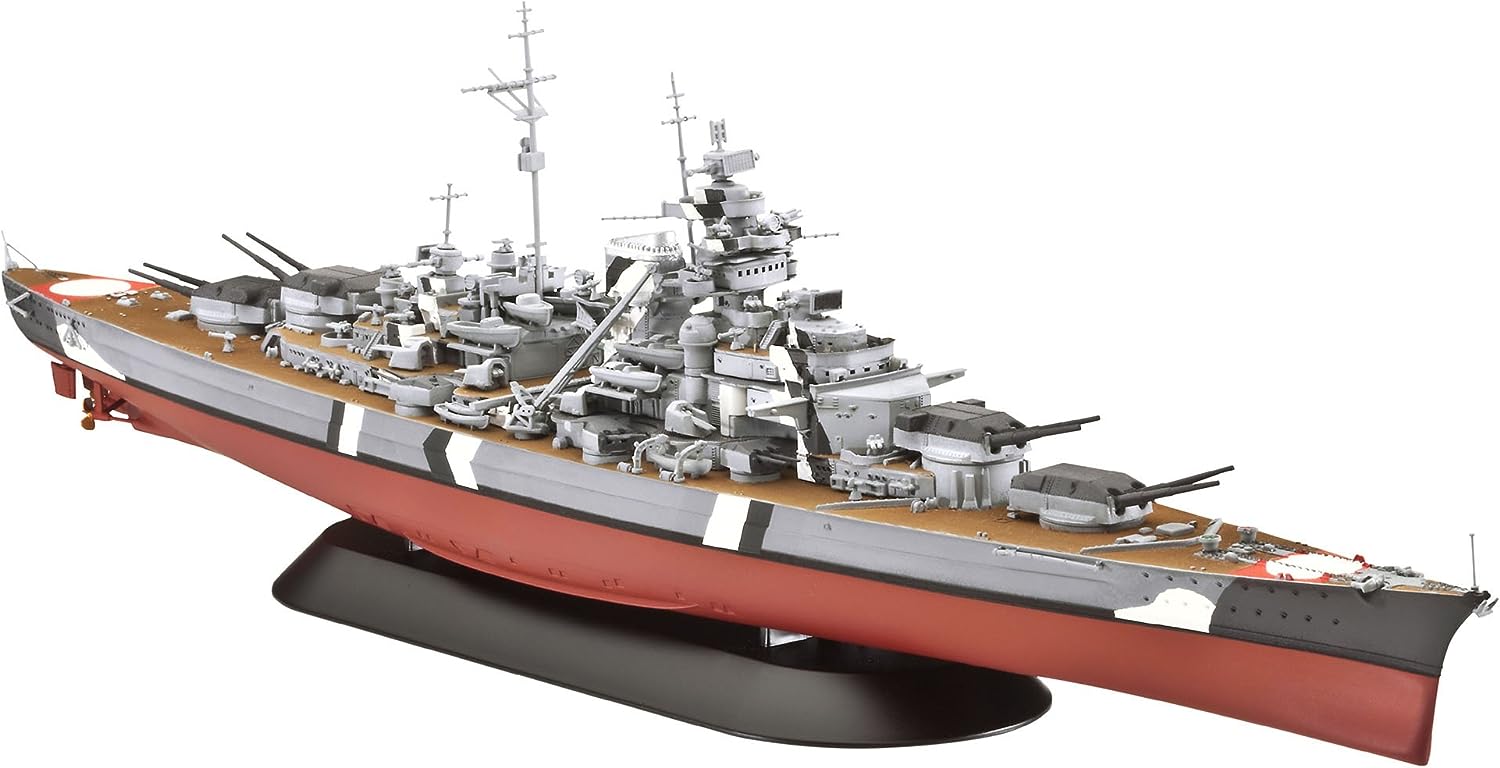