These are wonderful sailing ship kits that are easily assembled, fun to build and look great when complete.

Plastic kits are a great introduction to model making

While many will argue that wood is a better material for sailing ship models – it is, after all, much closer to the original materials used to build classic ships – plastic is a wonderful alternative for beginners as the pieces are more robust and less likely to break.

It also doesn’t mean that your finished model ship will be any less realistic – plastic models can be easily painted to realistic effect, meaning the model you end up with is every bit as good as wooden counterparts.

These models come with prefabricated parts (from 60 to up to 800), and vary in complexity (generally speaking, the more parts the kit has, the more complex it will be to assemble). We’ve noted the recommended age ranges for each, but you can always use your own judgement on this – they make great joint projects for families!

The HMS Bounty is perhaps one of the most infamous naval vessels of the era (late 1700s). The vessel was commissioned by the Royal Navy and set sail for the West Indies on a trade mission – but never reached its destination. The crew mutinied, led by the ship’s Lieutenant and the ship was later burned and salvaged for parts at a nearby port.

The incident became known as the “mutiny on the Bounty” and has been adapted into several films, starred in by a range of Holywood greats, including Errol Flyn, Clark Gable, Marlon Brando, Anthony Hopkins and Mel Gibson.

This wonderful little model is a unique piece of naval history, capturing essences of the British Empire, military history, mutineers and piracy! A great addition to any collection.

The model has 171 pieces, meaning it’s a bit more complex than more basic models but as you can see from the image, it looks beautiful when complete. It would present a challenge for a beginner, but if you’re committed then it’s entirely manageable, although it’s possible younger children may need some assistance with it. 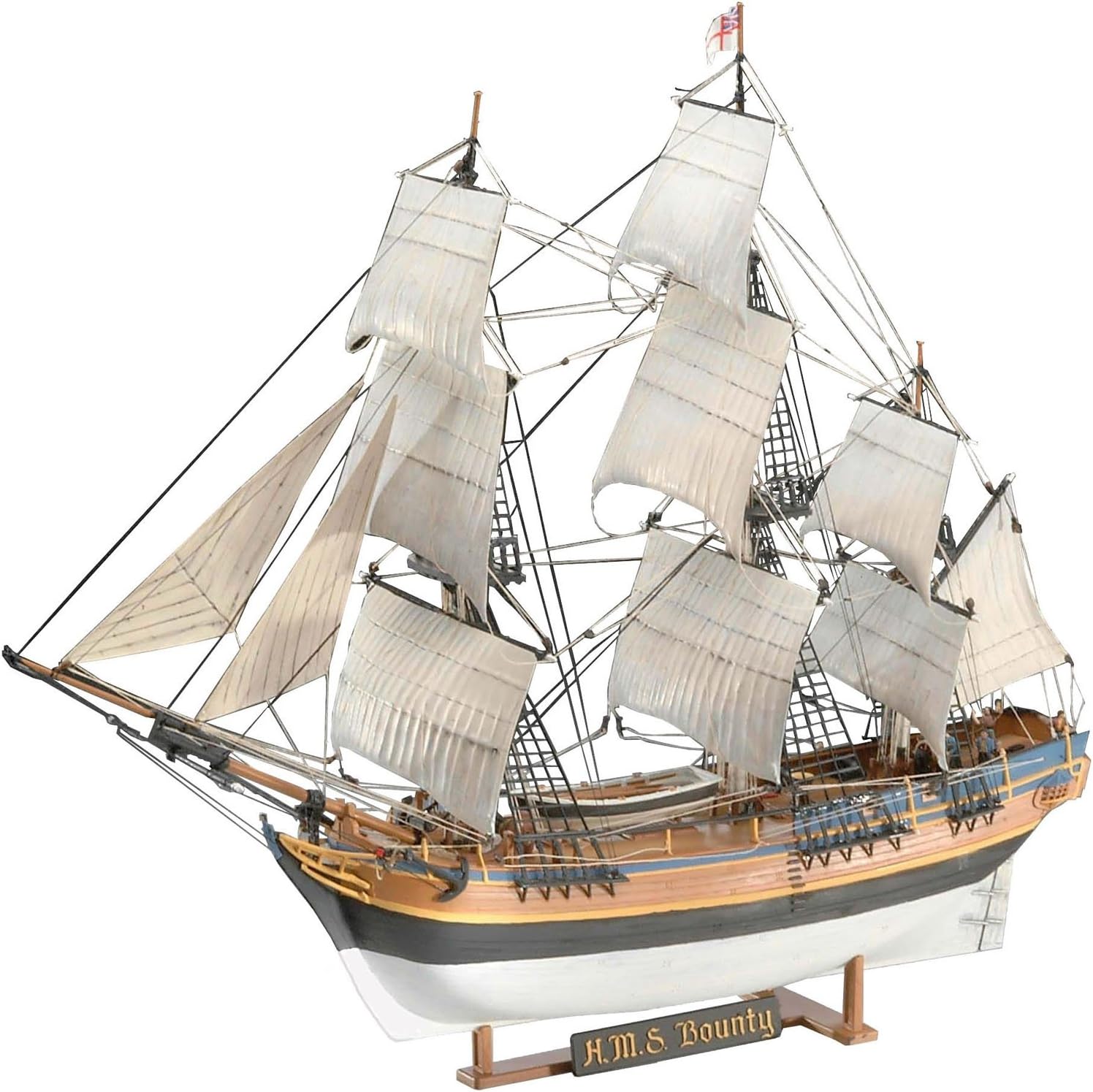 The Cutty Sark was a British clipper ship, built in Dumbarton in Scotland. The name comes from a Rabbie Burns poem, Tam o’ Shanter and was the nickname of a witch who wore a short chemise (or ‘sark’) – ‘cutty’ is Scots for short or ill-fitting. The ship sported a masthead of the bare-breasted witch. Sailors will be sailors!

As with many of the classic models featured in our guides, the Cutty Sark was one of the last clippers of its kind as it was soon rendered relatively obsolete with the advent of the steam engine. But for a short period of time, it was at the pinnacle of sailing technology and one of the fastest tea clippers on the seas. The real Cutty Sark is moored in Greenwich and is open to visitors as a museum.

With such a curious backstory and an end of an era model, this makes a great addition to any collection and an interesting first model for newcomers. With 220 pieces, it’s complex but that means the final model is also wonderfully detailed. Again, one for both the enthusiastic newcomer or seasoned model maker. 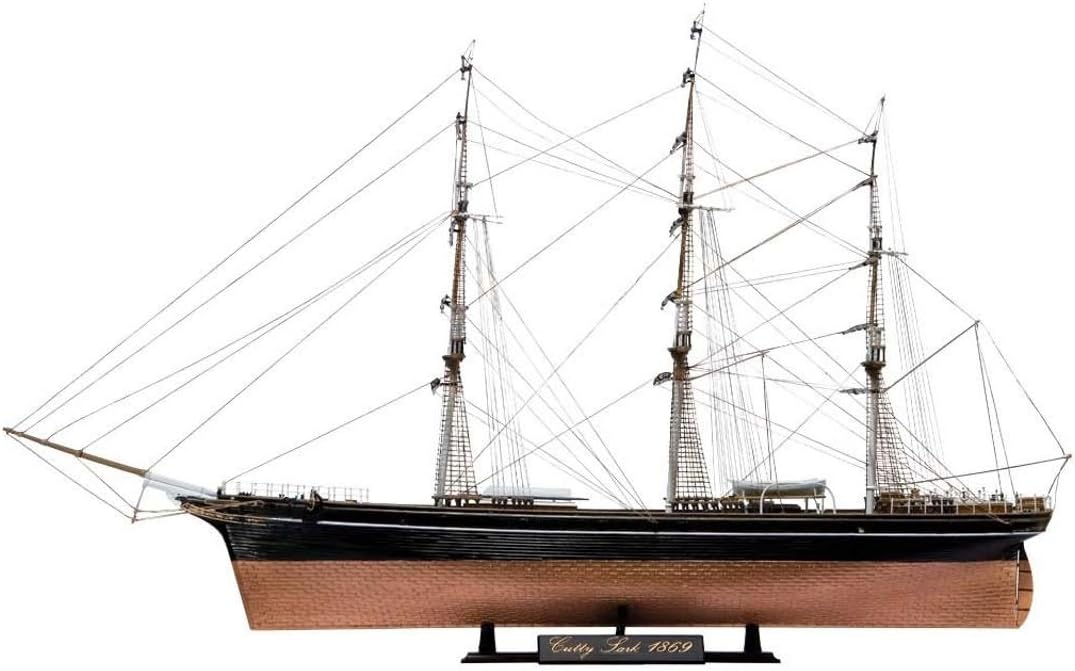 This is a lovely little fishing trawler model based on the ‘Ross Jackal’ built by Ross Trawlers Ltd in the UK in the latter half of the 1900s. The first model they built was the ‘Ross Tiger’ and the firm subsquently went on to build over a dozen models (the ‘cat’ boats). The Jackal was built in 1960 in Grimsby, which was the heart of the revolution of fishing trawlers which transformed from early sailing vessels to steam powered trawlers.

This is a much simpler and lower cost model, which makes it a great introduction for beginners and kids. With 61 pieces, it’s still a challenge to complete, but won’t take as long as the more complex models. A great introduction, particularly if you’re not so keen on more military focused models. 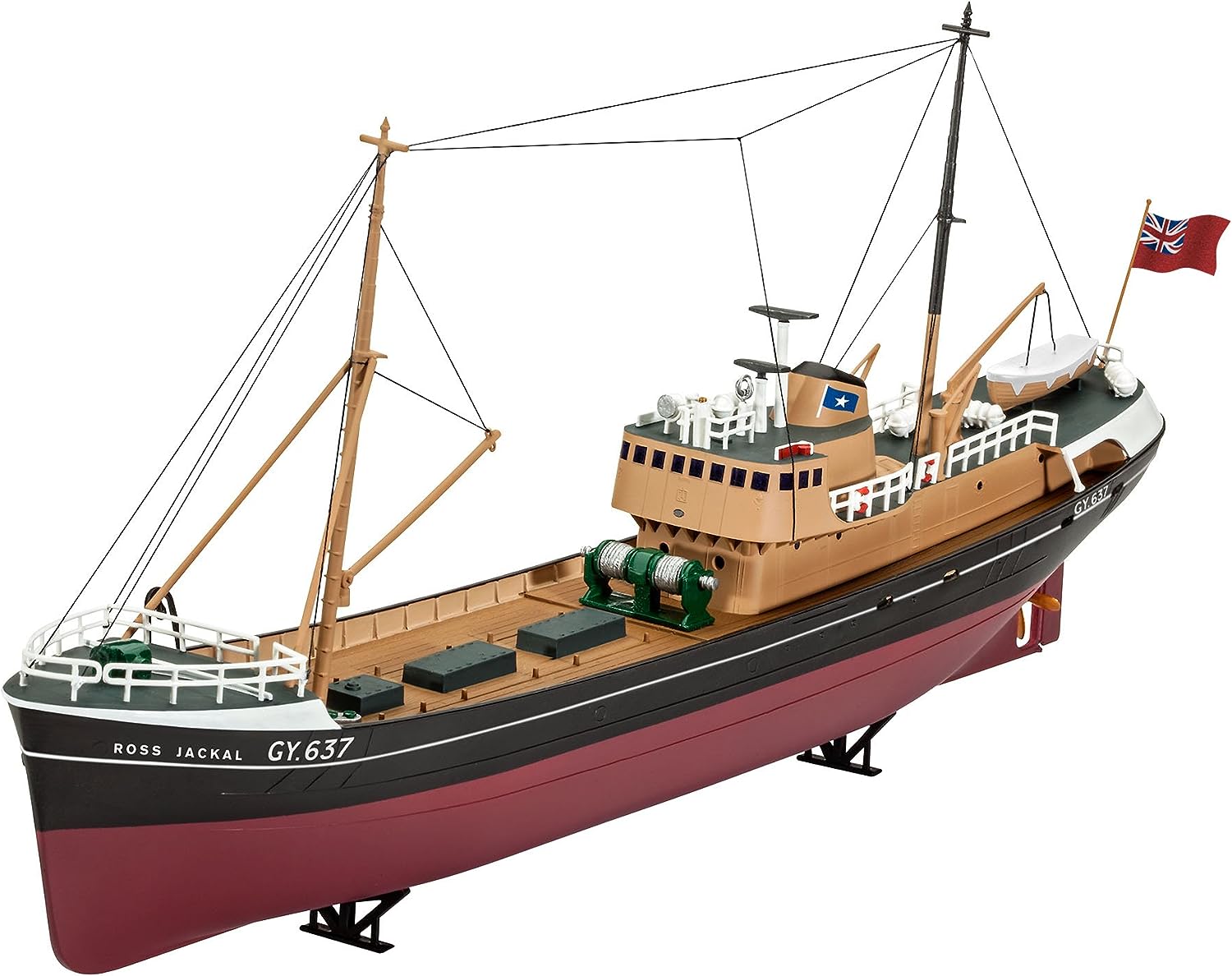 This is another simple model that comes in at a lower cost, and one that’s ideal for kids – The Black Pearl, which was captained by Captain Jack Sparrow in the film, Pirates of the Caribbean. We can’t very well write a guide to old sailing ships without featuring one from one of the most popular pirate films of all times!

While the model lacks the realism of some of the others featured here, that’s part of the charm. It’s a little bit of fiction which means kids are more likely to take to it (particularly if they’re not entirely convinced about model building yet!). The parts are sturdy and easily fit together, so it makes for a good project for them. The final model looks great and while it can be painted to add more detail, you don’t need to. 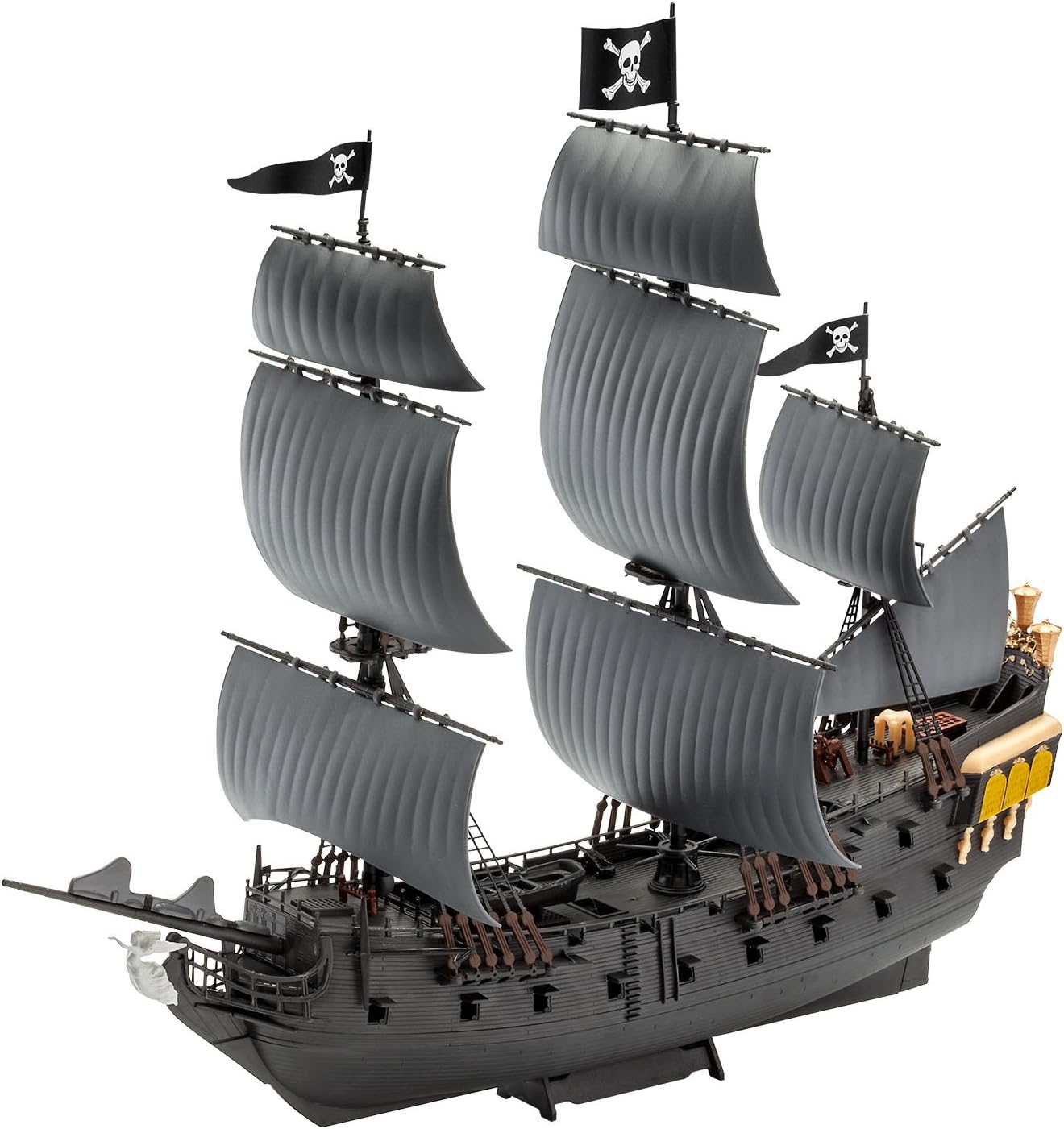 Viking Longships are perhaps some of the most famous models, being used as early 800AD by Viking invading parties! It’s an interesting era of history and these boats were used regularly in raiding expeditions between Europe and Britain.

The design of the boat has a bow at either end, allowing it to be beached and launched in either direction. Handy if you want to make a quick getaway with your newly acquired loot!

Revell grade their models on a scale of 1 to 5 difficulty and and this is a 3. This means it is easy to assemble but require gluing and painting to finish the detail. This model is suitable for children from ages 10 up, but some may require adult assistance to complete some of the finer detail. 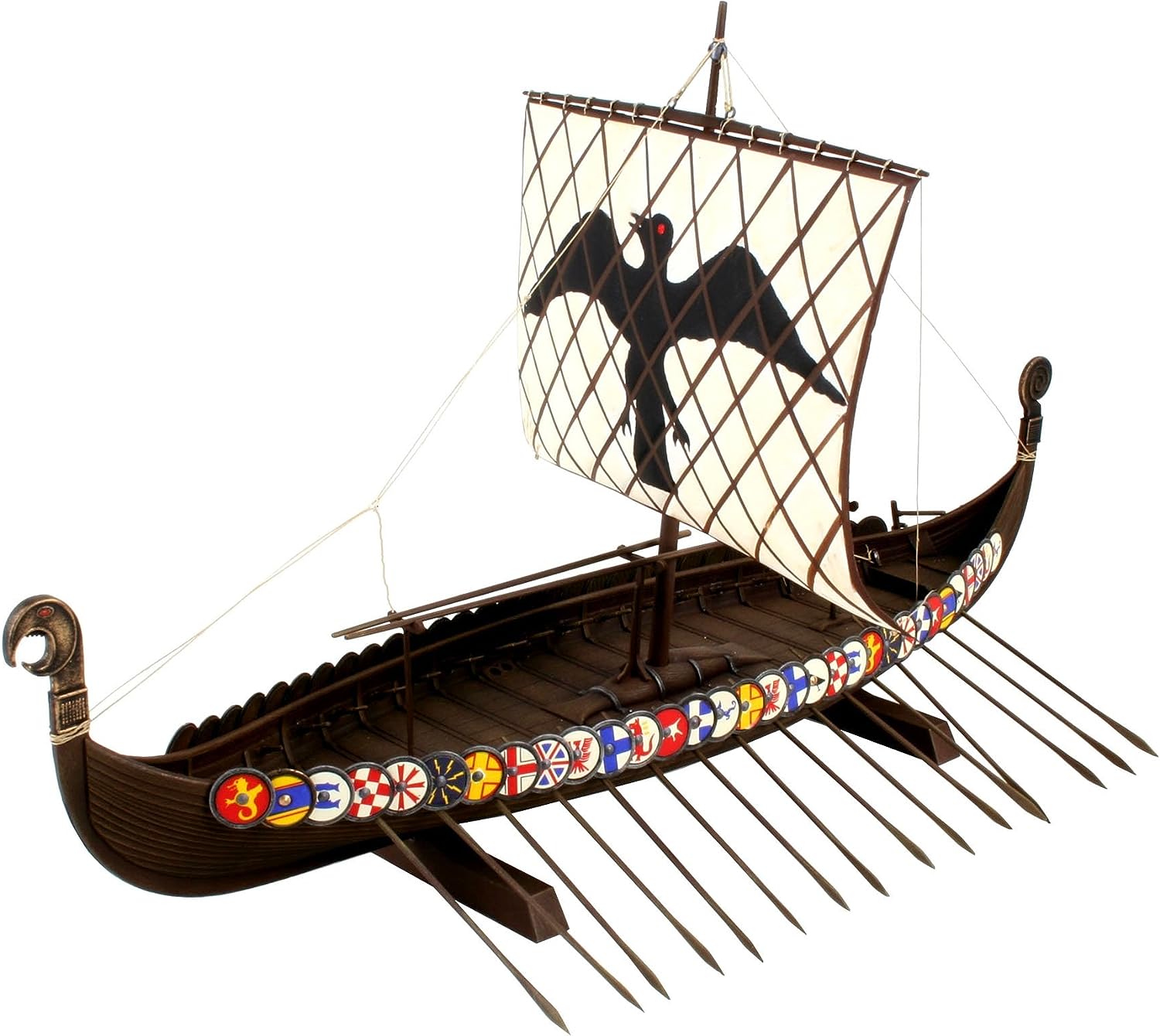 The HMS Victory was a first-rate ‘ship of the line’ used by the Royal Navy from the 1750s to early 1820s. History buffs will know it from the Battle of Trafalgar where it served as the flagship in Lord Nelson’s fleet. The designation “first-rate” was used by the Royal Navy to indicate the largest ‘ships of the line’ (which was the type of warships designed for the “line of battle” naval tactic).

This is a beautifully detailed model and a wonderful style of sailing ship that often springs to mind when thinking about older naval ships. With an impressive 269 pieces, this is definitely more of a project to complete than some of the others, but the result is exquisite.

It might not be entirely suitable for children, but if they (or you) are keen model builders, then this would make a wonderful gift and a lovely addition to any collection. The finished model will look great displayed in any room. 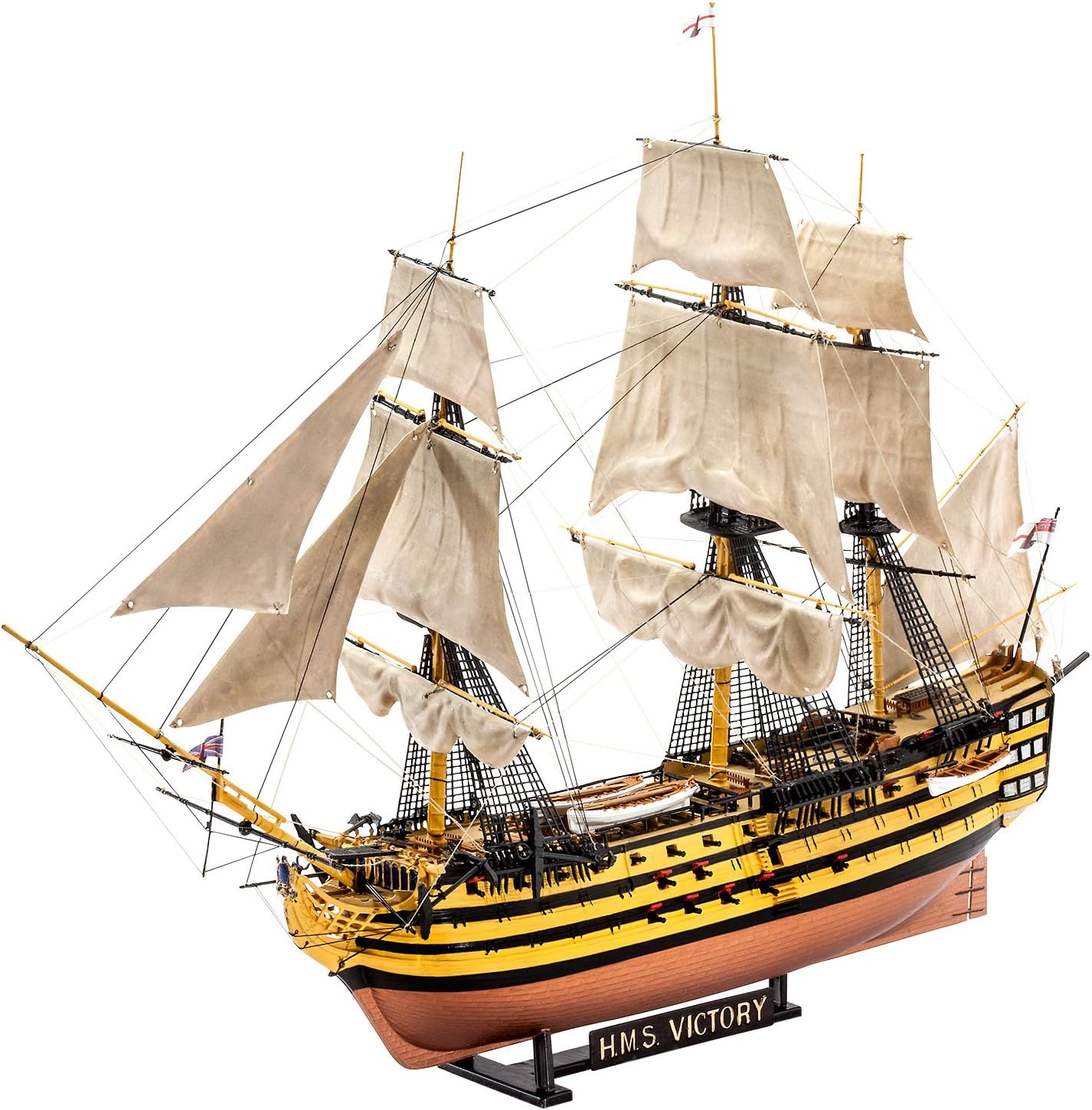 It’s only right that we finish off the guide with an absolutely epic pirate ship model and this one certainly fits that bill! It’s odd that we romanticise pirates, but there’s something about their rebellious nature and free-spirited shunning of the modern world that was slowing closing in on them that sparks the imagination.

This pirate ship comes in a whopping 896 pieces, so it’s definitely one for people who are serious about model building. The manufacturer does recommend ages 10+ so it could be completed by kids, but there’s a lot of complexity there, so they may need some assistance. For older model builders, this is a fantastic addition to their collection and introduction to serious model making.

It’s recommended that you paint the parts as you assemble them, so the whole project will certainly take patience, but result is simply outstanding. The final model sits at 55cm in length, so will make a wonderful piece to display in any room and while completing it won’t quite give the assembler pirate-level bragging rights, it’s certainly a great talking point. 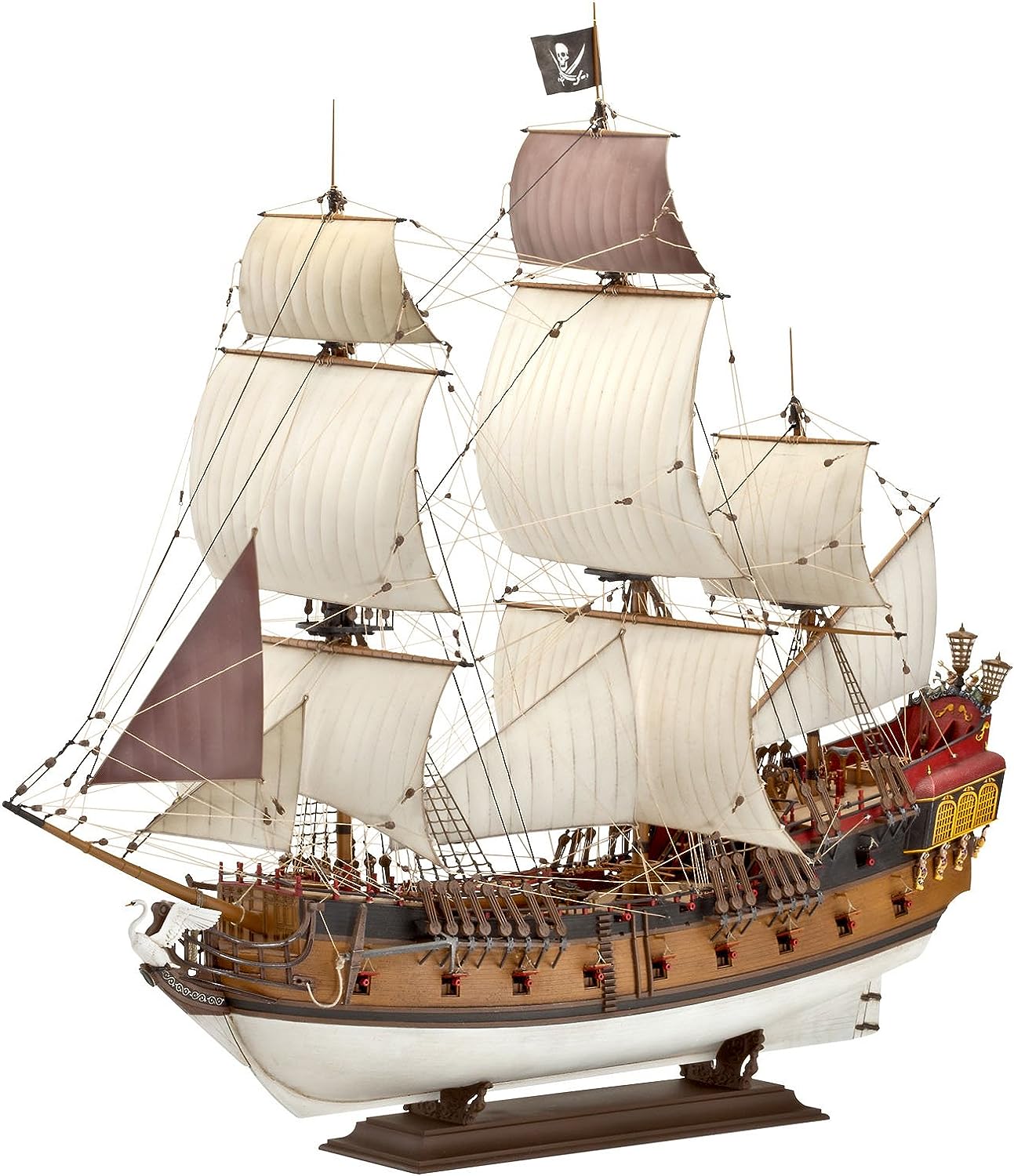