Tanks dominate the battlefield and turn the tide of wars as they protect and support infantry. These are models of some of the most impressive tanks from recent military history.

Tank models tend to be smaller when complete than ships or planes, but they are beautifully detailed

In terms of military vehicles, we often look at the devastating firepower of battleships or the courage of dog-fighting aircraft but ground based vehicles are also a critical part of any battle plan.

Tanks provide critical logistical support to troops, while sporting immense firepower of their own. They will commonly be at the forefront of any ground assault and how they are able to stand up to opposing tanks determines the outcome of the battle. Wars have been won on the engineering skill and knowledge that has created tanks.

These models are more geared towards intermediate and advanced model makers as they have a lot of small parts and can take skill and patience to put together. That’s not to say that they aren’t an option for enthusiastic beginners though!

The German Tiger II heavy tank was an upgraded version of the earlier Tiger I, adopting a sloped, thick armour which is used by tanks and battleships as the sloped facing makes it more difficult for armour piercing rounds to penetrate the hull. The Tiger II was introduced late into the Second World War, and first deployed during the Allied invasion of Normandy in 1944. While the Tiger tanks weren’t quite as reliable as other models, they were remarkably agile considering their size and weight. In addition, their heavy armour and longer-range gun meant they were formidable against Allied tanks, with the thicker front armour meaning opponents would need to flank the tank for the best opportunity to inflict critical damage.

This is a lovely little tank model and with 285 pieces, it’s pretty complex so better suited to intermediate and above model builders. Tank models tend to be smaller when complete (than ships for example), which means smaller, more intricate parts to assemble. But the final model has a lot of detail on it, which will look wonderful when painted. 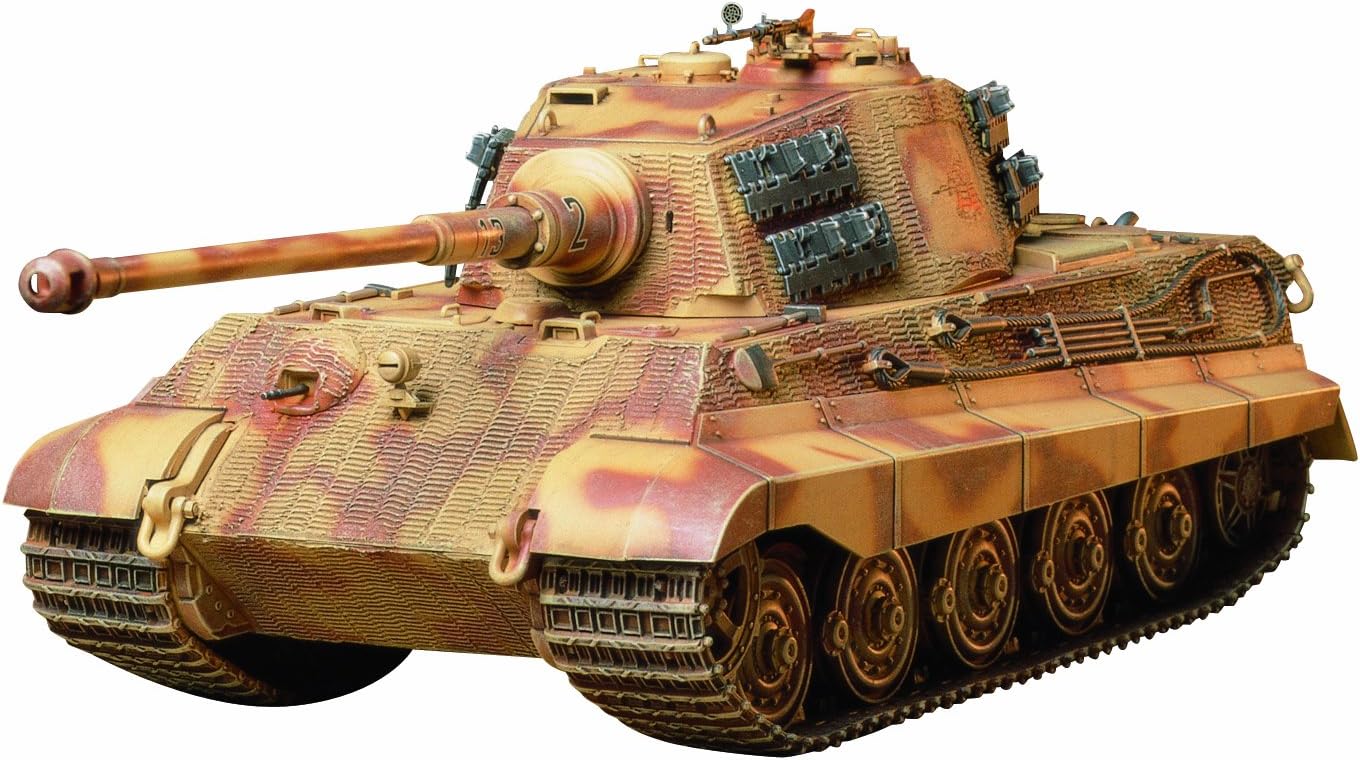 Commonly considered by historians to be the first modern tank design, the Renault FT Light Tank was the first tank to feature a fully rotating turret. Over 3,000 models were produced from 1917 and were largely in service during the First World War (the US also built a tank based on the same design, the M1917 Light Tank, but they weren’t completed in time for use during the war). The turret was originally designed to mount an 8mm machine gun, but was later adapted to mount a small canon.

While a number of these tanks were deployed during the Second World War, they were all but obsolete. A popular myth surrounding the French’s capabilities during the Second World War suggested that they had no modern hardware – in fact, they had as many modern tanks as the Germans, but they were single turret models and didn’t hold up well against the German’s superior Panzers.

This is a wonderful little model of a unique and pivotal piece of history. The final model is small (it’s a small tank, so it should be), but comes with a choice of two weapons for the turret. With around 100 pieces to assemble, it’s more geared towards intermediate model builders, but an enthusiastic beginner could assemble it and be left with a beautifully detailed tank model ready for painting. 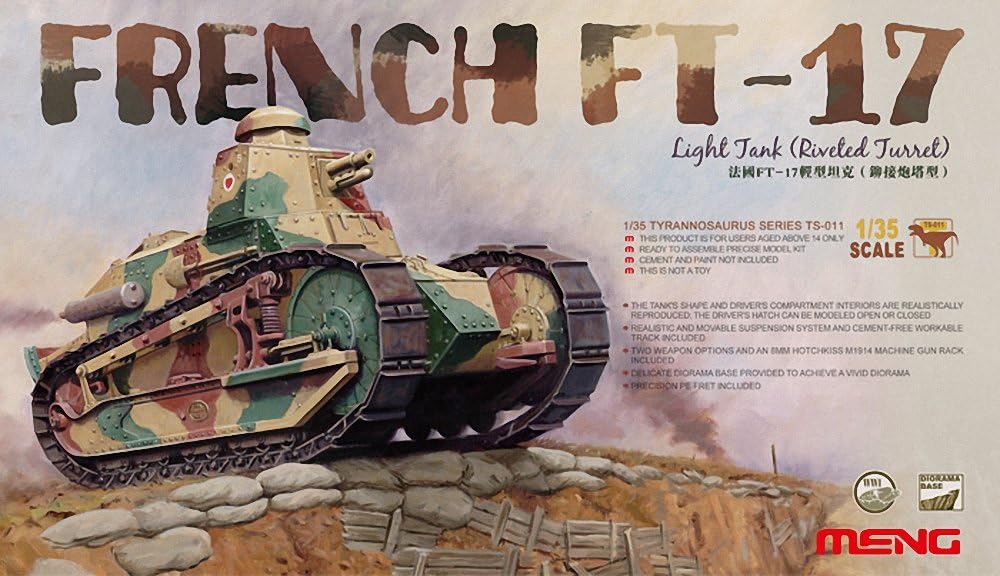 Another little piece of history, the German A7V heavy tank was the first tank produced by the Germans in the First World War. The first British tanks appeared on the Western Front in 1916, which prompted the Germans to begin exploring tank design and manufacture. The design they came up with was the A7V, although only handful were heavily armed and used for combat purposes – the rest were use as Überlandwagen supply vehicles.

It’s curious to consider what the armies of the world must have though when these metal beasts first starting rolling across the battlefields. Huge military vehicles had generally been seen only at sea or in the skies, but for relatively poorly-armed infantry these behemoths must have been a terrifying glimpse into what modern warfare would become.

While the A7V doesn’t quite have the traditional tank appeal, lacking a mounted turret, it is an impressive vehicle nonetheless. This model comes with workable tracks and the viewing ports can be opened. As with other models from Meng, the parts are precision engineered and wonderfully detailed, making this another excellent choice for model buildings and military history enthusiasts alike. 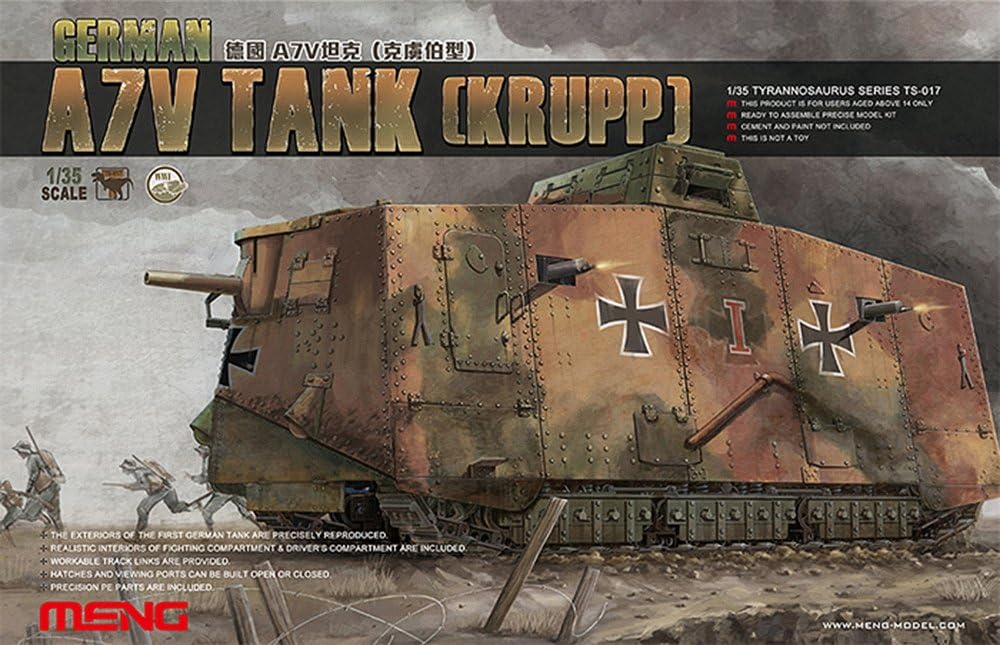 The British Cromwell Tank was a cruiser tank used by the British during the last couple of years of the Second World War. Tank design is understandably constrained by trade-offs between weight (and armour / firepower) and speed. Cruiser tanks were created as an alternative to infantry tanks (which were slower, but heavily armoured and would accompany infantry) – they were lighter and although they weren’t as heavily armoured, this gave them more agility and speed.

The Cromwell tank was the fastest to be deployed by the British during the Second World War, which gave them a notable advantage in skirmishes with the enemy. Indeed, in one occasion, three tank commanders were able to leap a 20ft wide canal when surprised by an enemy squadron. While this speed did give them the edge over enemy tanks, the rough terrain took it’s toll on the tank’s suspension which wasn’t up to the job. In later models, the top speed was lowered but was still fast for the era and one of the most successful British tanks of the war.

This is a simpler model, geared at beginner to early intermediate model builders. The final model is around 8cm in length, so will require a degree of patience to assemble, but the kit is made by Airfix who have a long and respected reputation for creating high quality kits.The low cost means this is a great gift!

The German’s Panzer tanks are perhaps the most famous model of tanks in military history. Developed in the late 1930s, over 8,500 were built and deployed during the Second World War, making it the most common German tank in use (comprising of over 30% of the German’s tank use). The Panzer IV was very much the workhorse of the German armoured force and was in operation throughout the Second World War.

It had originally been intended to be an infantry support tank, but was later adapted with a longer 75mm gun that could counter most Soviet tanks. Unlikely many military vehicles of the era, the Panzer IV was continuously upgraded to adapt to changing circumstances, meaning it was always a critical part of the German force.

This is a fantastic value kit and although it comes with over 500 pieces, it is geared towards beginners and early intermediate model builders. The final model is beautifully detailed and prime for painting. 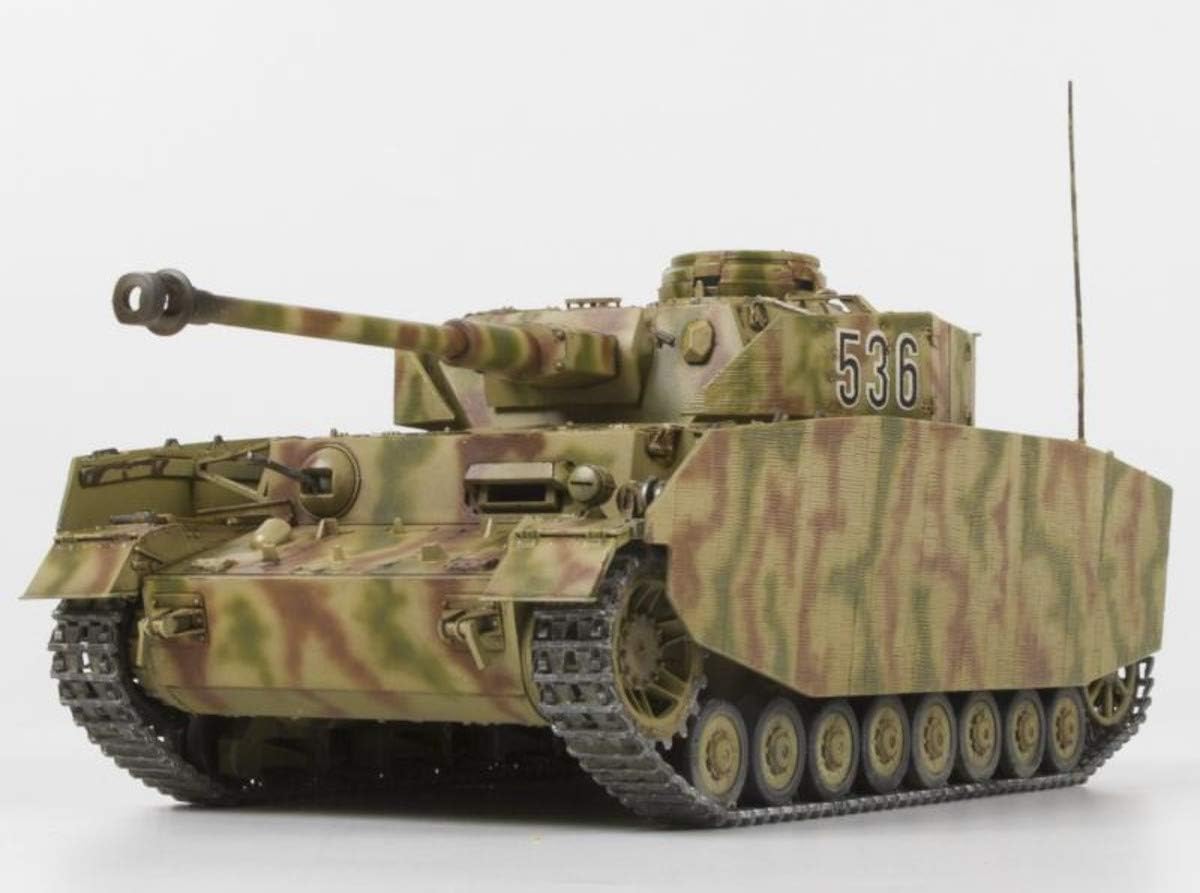 The Soviet SU-100 was a tank destroyer which was used throughout the Second World War. While other classes of tanks were designed for different purposes – to support infantry or to move quickly across the battlefield – tank destroyers had one purpose; to hunt and destroy other tanks. Unlike other models of tanks which sported a fully rotatable turret, the larger weapon on the SU-100 meant it was heavier and therefore needed to be forward-facing. But this trade off in agility came with superior firepower, which was entirely necessary for it’s role on the battlefield.

This is another high-quality kit from Zvezda. While the pieces are snap-together, you might want to glue them as you go to ensure the model comes together nicely. With less than 100 pieces, it’s simpler to construct than more complex kits, but the finished model is superbly detailed and great value as it comes in at a lower price than the larger kits. 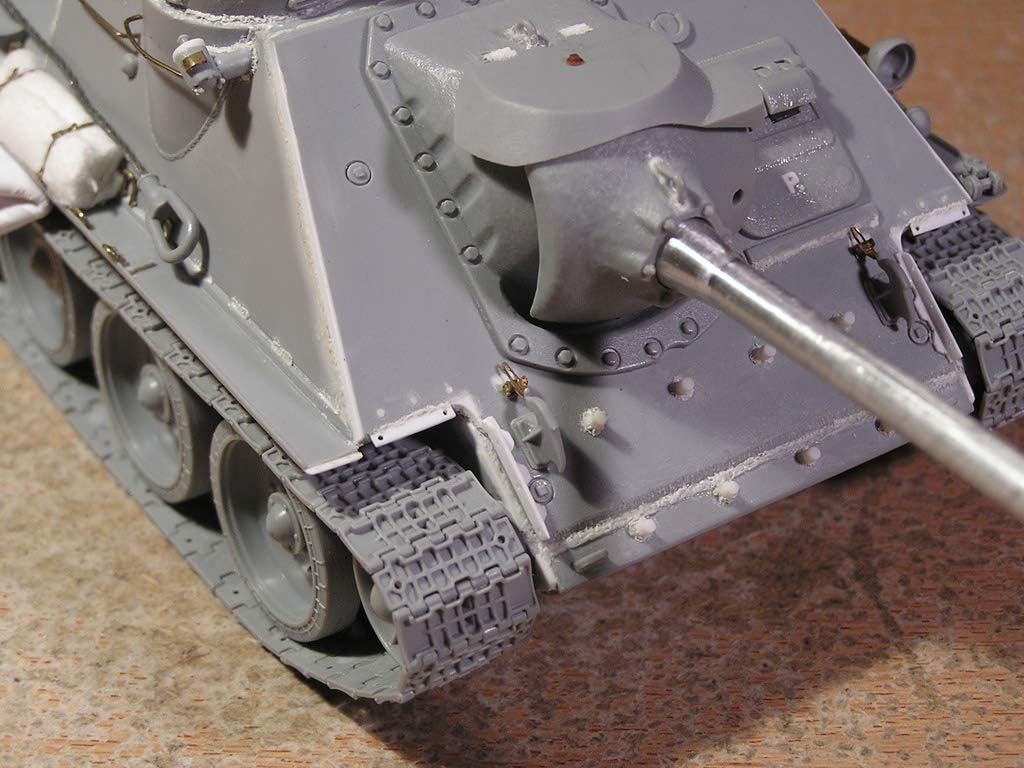 The Russian T-90 was a general purpose battle tank which was first deployed in 1993. Battle tanks are designed to operate in a variety of different situations, from escorting and protecting infantry to hunting and destroying enemy tanks. While the model hasn’t been deployed in many combat situations, several were used during the Chechen War and reportedly survived several rocket attacks relatively unscathed, leading to the consensus that it is the best-protected Russian tank in use.

This is a wonderful example of a more modern tank and comes with the front-mounted dozer attachment. The kit is from Meng, and the final model is highly detailed and great for beginner to intermediate model builders. 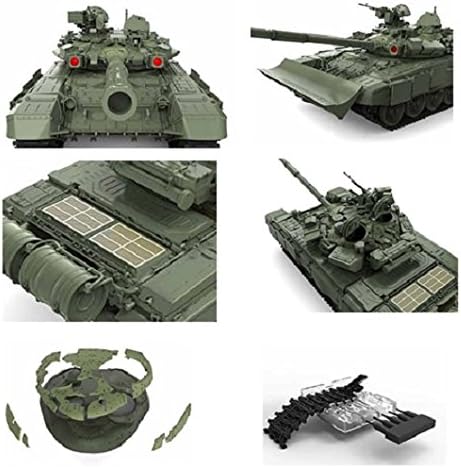 The French AMX-30 is another wonderful example of a more modern battle tank. Designed to anticipate more modern threats, the tank sacrifices some armour and instead relies on speed and it’s smaller frame size as a defence. Originally equipped with a 105mm main gun and heavy machine gun, the latter was subsequently replaced with a dual-purpose 20mm autocannon (which are generally higher calibre than machine guns and fire armour piercing or explosive rounds). The autocannon can be elevated to defend against aerial threats.

This is a complex kit, with over 400 pieces, but the final model is detailed and both the main gun and autocannon can elevate when complete. This is a great choice for intermediate and above model builders, and anyone with an interest in modern military vehicles. 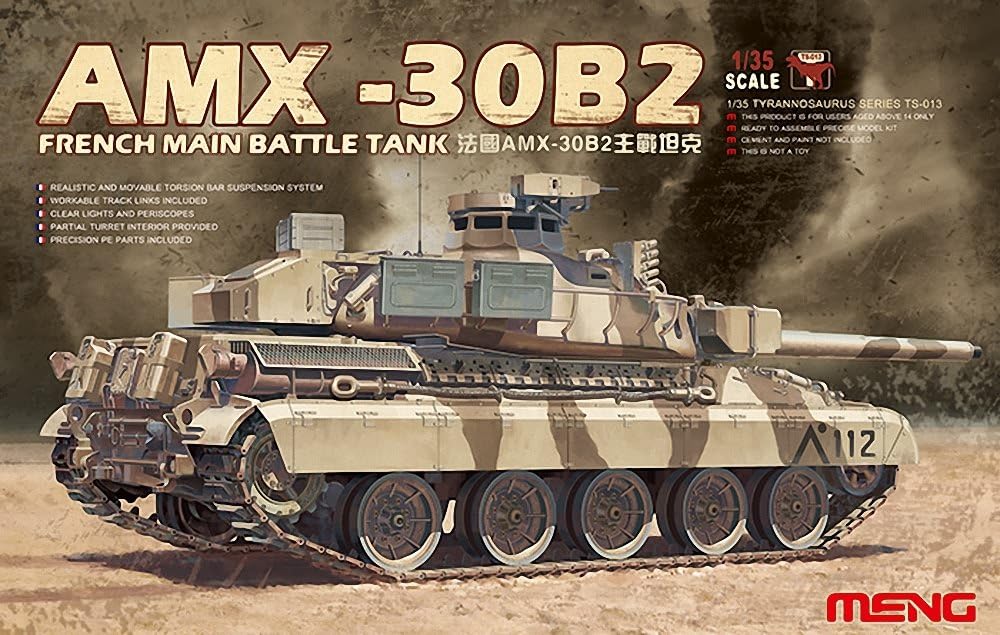 The British M3 Grant is a medium tank based on the American M3 Lee model and was in use from the 1940s and throughout the Second World War. For model collectors, the unique shape of the tank is something that piques our interest, but in practical terms, the tank’s silhouette didn’t do it any favours as it was easily recognised on the battlefield and presented a larger target for enemy forces. In addition, the sponson mounting of the main gain (fixed to the front / side of the vehicle) and poor performance off-road, meant the tank didn’t perform well in the field.

Nonetheless, this is a lovely little kit that comes with 250 pieces and results in a distinctive and detailed model that will look great in any collection. 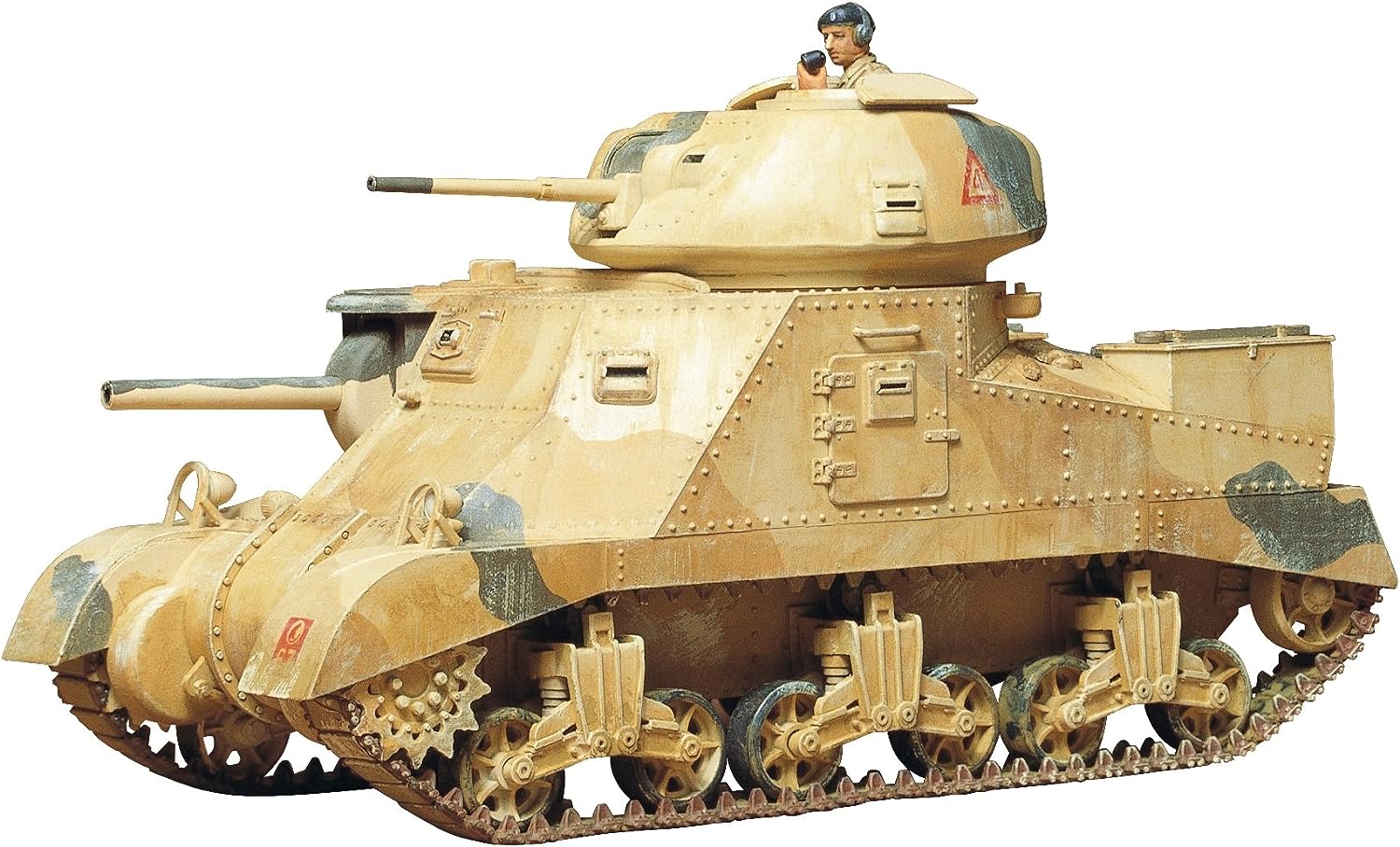 We talked a bit about the Tiger II earlier in this guide, but the Tiger I is worthy of note too. It was a German heavy tank used throughout the Second World War and while its successor adopted sloped armour, the Tiger I was characteristically box-like. What stands out about the Tiger I was that it was a superb feat of engineering – in fact, it was so technically superior at its time, it was considered to be over-engineered – too complex to build and maintain. But, it was mechanically robust and did perform well on the most part, but ultimately was let down when the terrain didn’t suit it (it didn’t work well in mud or snow due to its weight), and also had a high rate of fuel consumption.

This is another great little kit from Tamiya and one that can be enjoyed by enthusiastic beginners and more advanced model builders alike. 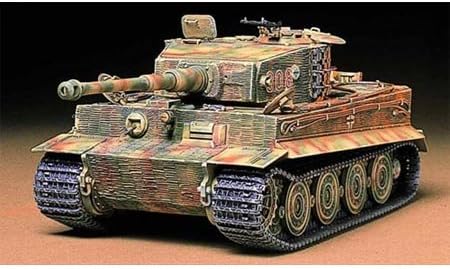