One of the most iconic aircraft of all time, the Supermarine Spitfire has inspired generations to look towards the skies and is a popular choice for model builders.

The Spitfire is often the first WWII era military aircraft that springs to mind when people talk about model kits, as it’s popular with model builders and aircraft enthusiasts alike.

A single-seat fighter aircraft, the Spitfire was used by the Royal Air Force and other Allied countries before, during and after the Second World War. While it’s counterpart, the Hawker Hurricane, was produced in larger numbers (and is actually responsible for destroying more enemy aircraft), the Spitfire’s unique elliptical wing design and thin cross-section meant it could achieve higher top speeds than other fighters, making it a formidable foe to counter the Luftwaffe’s impressive Messerschmitt Bf 109E aircraft.

Its higher performance gave it an edge in combat, meaning more Spitfires would return to base after battle and many more have survived to this day (there are around 60 still operational). And, as many civilians would turn up to see their RAF heroes return from battle, the Spitfire became more recognised as a symbol of British spirit and tenacity. Post-war, movie studios favoured the Spitfire in films as they had access to some of the surviving aircraft for production, which has further immortalised the model for generations to come.

Throughout it’s lifetime, there were 24 marks of Spitfire produced, with a number of sub-variants, engines and wing designs that could accommodate different weapon allocations to allow the Spitfire to perform different functions – from intercepting enemy fighters and bombers, to photo-reconnaissance.

A truly remarkable aircraft! This guide looks at some of the most popular Spitfire variants which come in both model form or kit form.

The Spitfire Mk VIII is considered by many aircraft enthusiasts to be the best mark of Spitfire (of course, there are many opinions on the topic!) and it was the third most-produced mark, with over 1650 units built.

The model represented a technological turning point in the Second World War, where the earlier marks of Spitfire were on the verge of becoming obsolete by the new German Focke-Wulf Fw 190 (FW 190) which out-performed the Mk V (at the time, the RAF’s best fighter) in almost all areas. The Mk VIII was adapted to use the new Merlin 61 engine, which offered impressive performance improvements at higher altitude, but required a sturdier frame to support the new engine. This new model had the same operational range as the earlier Mk V, but it was able to cover the distance at a much higher speed. In addition, it used the C wing armaments (four cannons or two cannons / machine guns) and could carry up to 1000lbs of bombs.

The Mk VIII was also the first aircraft to use a “bubble canopy” which gave its pilots much better visibility against enemy fighters who would exploit blind spots in earlier models. This design was so successful, a variant was later adopted in subsequent models.

This wonderful model kit from Tamiya is aimed at the more experienced model builder, but the result is a wonderfully detailed scale model of the Mk VIII. The model features movable ailerons, rudder and elevators and comes with three different markings (USAAF, RAAF, RCAF) and two pilot figures. The finished model can be mounted on the included stand. 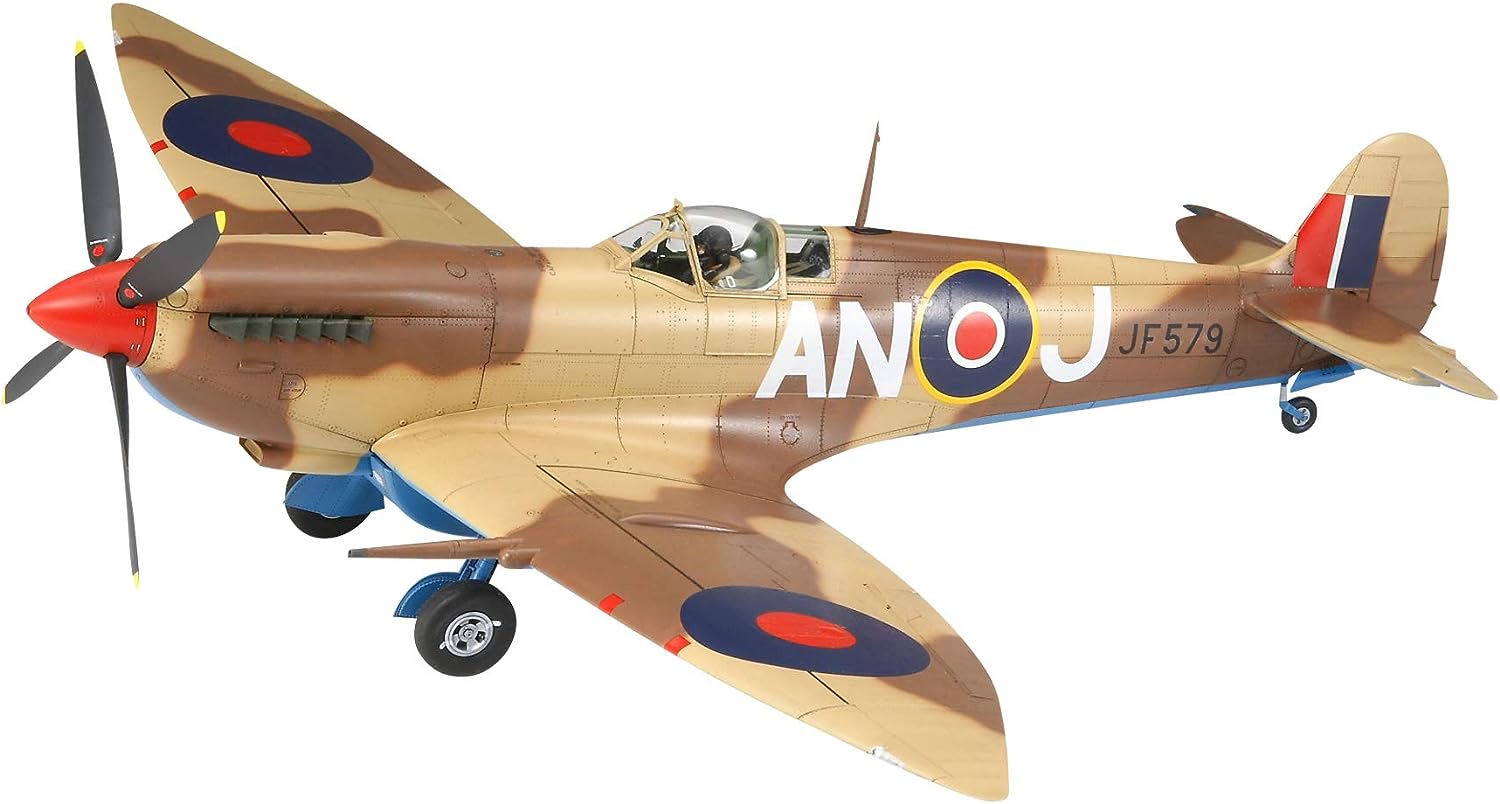 The Spitfire Mx XIV was one of the most powerful models, with a significantly higher top speed at high altitude than earlier models thanks to the supercharged Griffon 61 and 65 engines. The model also sported a unique 5 blade propeller, unlike earlier models, giving it a better cruise speed.

The Mk XIV was introduced later in the Second World War, and were used to escort bombers to Germany and were also used for armed reconnaissance, searching for targets behind enemy lines. Their superior speed meant that they were able to out-perform Bf 109’s at any altitude, giving Allied forces an advantage over the Luftwaffe.

This lovely little Airfix model is a fantastic price for such a detailed model of a popular aircraft. Uniquely, it comes with red civilian colour schemes, making it great gift for model building pros or beginners alike (although with 118 parts, it’ll definitely need steady hands and patience to assemble). 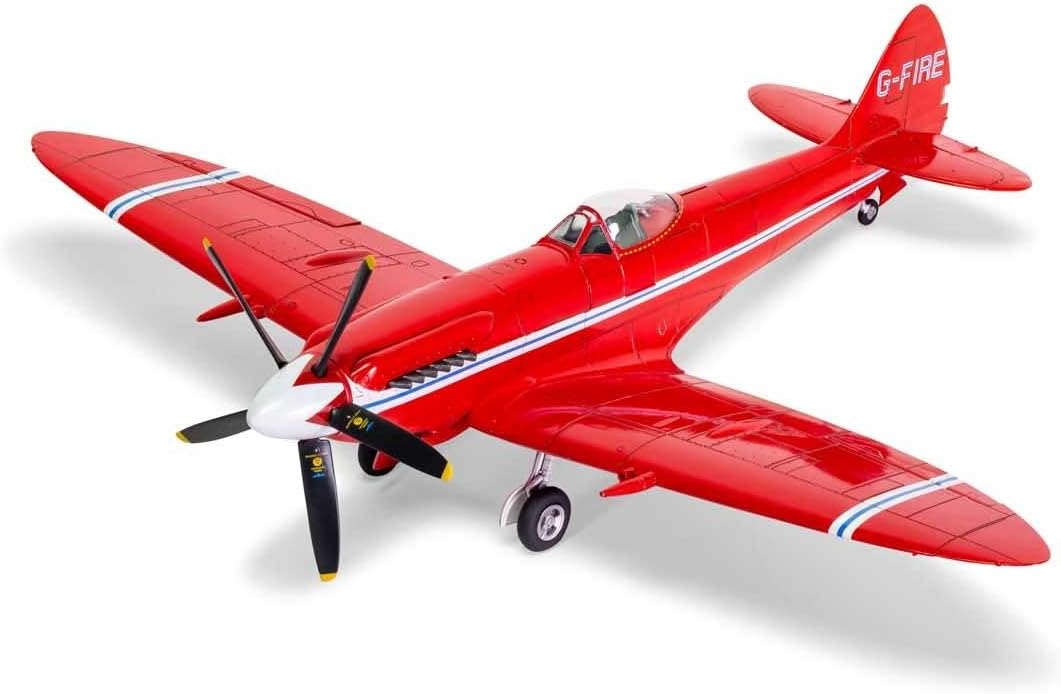 The model that began the legend, the Spitfire Mk I was first produced in 1938 and went on to spawn 24 marks and over 22,000 aircraft built to defend Britain and aid Allied Forces during the Second World War.

The original design was based on seaplanes as the Air Ministry wanted a lightweight and aerodynamic fighter that could be mass-produced to help with the war effort. But in the early days of production, the life of the Spitfire wasn’t guaranteed as the unique design created production problems, as some contractors had difficulty with the manufacture of key components. But, Supermarine were confident that those issues could be resolved and production continued.

Spitfires went on to play a pivotal role in the Second World War, giving Allied pilots the technology to compete with impressive German engineering that supported the Luftwaffe. They played an important role during the Battle of Britain, keeping Britain safe and enabling Allied Forces to then take the war to European shores.

This great model kit from Tamiya is a perfect starter model kit for aircraft or military enthusiasts. It’s a fantastic piece of history that you’ll love to assemble and the final model can be accurately painted and displayed with pride. 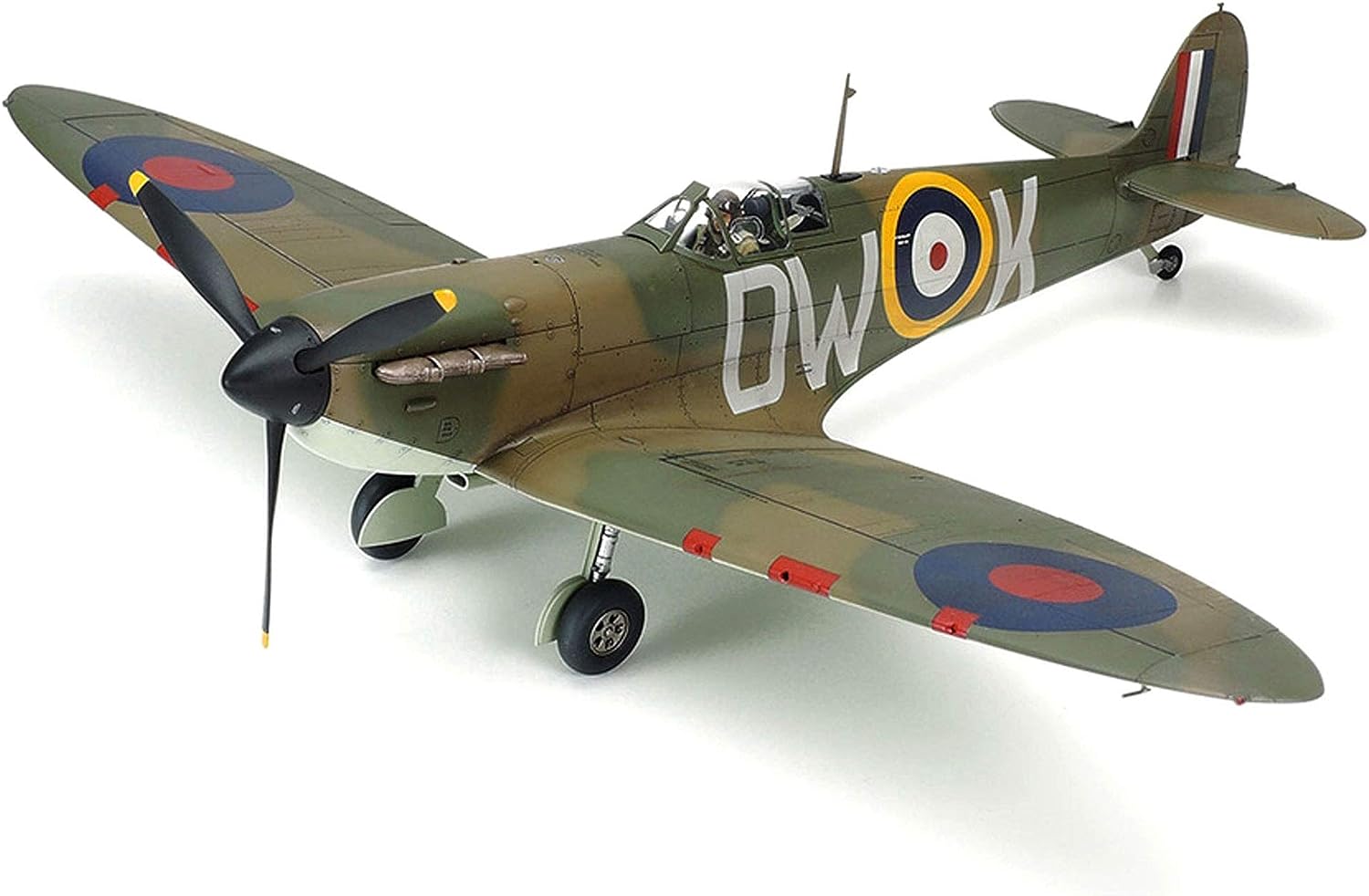 The Spitfire Mk V models were created as a stopgap measure while the later Mk VI was being developed. Allied Forces anticipated the need for higher altitude fighters to counter increased German bombing runs over Britain, so the existing Mk I models were fitted with an improved Merlin 45 series engine.

Supermarine went on to create several variants of the Mk V – with the Mk VB eventually becoming the main production version. The Mk V became the most successful stop-gap measure in service and ended up being deployed in all battlefronts during the Second World War. This is one of the reason the model is so popular with aviation and military enthusiasts – it wasn’t the result of detailed planning or production – it was simply a reaction to a pressing need and it performed admirably. There’s very much a feeling of the wartime spirit when you think of the Mk V.

This fully assembled and painted diecast model is a wonderful purchase for any aviation enthusiast who may not be as interested in building the model from scratch. It’s a perfect recreation of the Spitfire Mk VB and a great example of this classic aircraft. 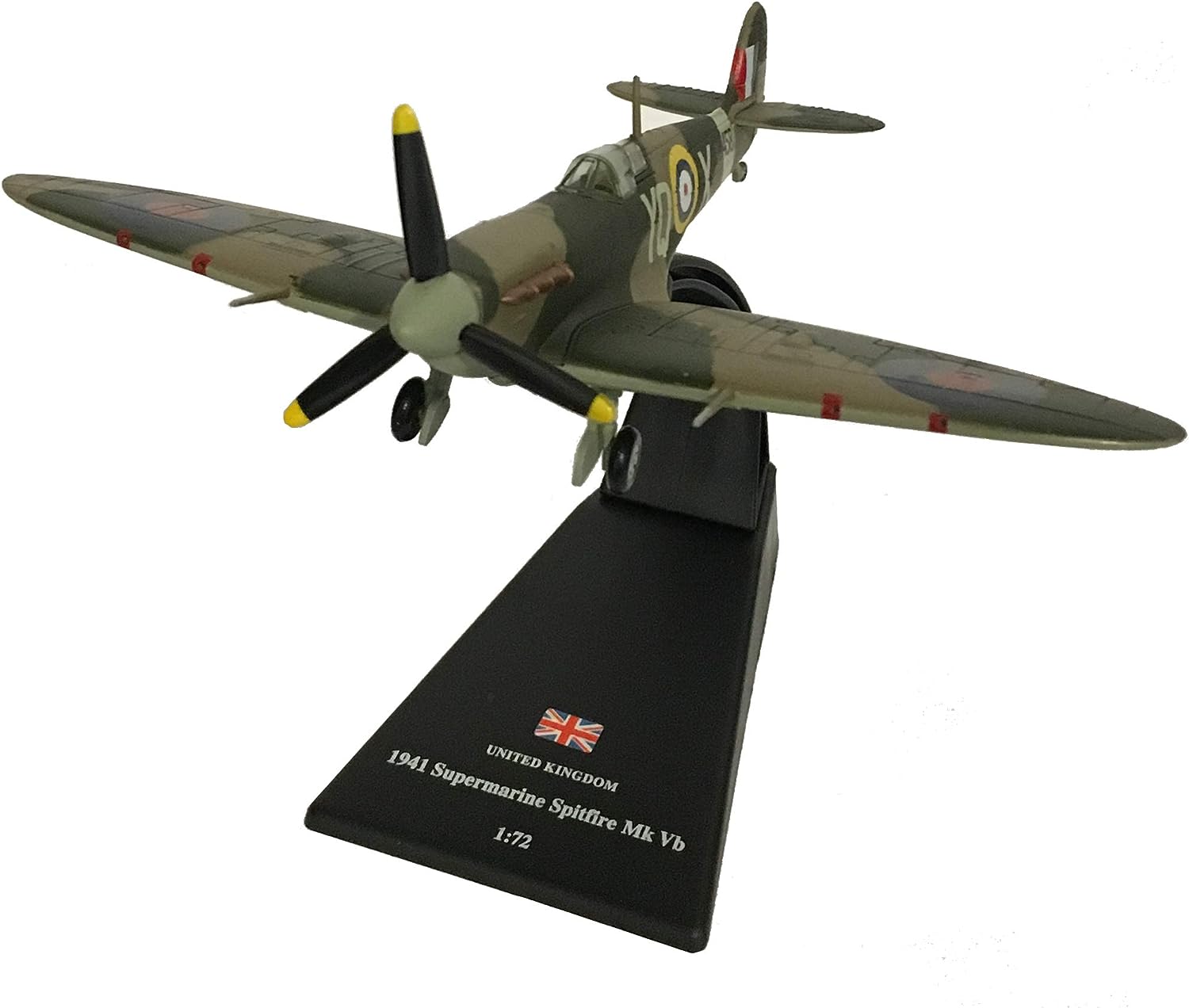 Similar to the Mk V, the Spitfire Mk IX was introduced as a stopgap measure to allow time for the Mk VIII to go into full production. The Mk VB had performed well, but the Luftwaffe’s superior Focke-Wulf Fw 190 were proving too much for the now-aging Mk VB to handle. The solution was the more advanced Mk VIII, but this would take time so Mk VC airframes were used to accommodate the new Merlin 61 engine and the Mk IX was born.

The new fighter was described as a “quantum leap” over the Mk VB, with the Air Fighting Development Unit noting:

The performance of the Spitfire IX is outstandingly better than the Spitfire V especially at heights above 20,000 feet. On the level the Spitfire is considerably faster and climb is exceptionally good. It will climb easily to 38,000 feet and when levelled off there can be made to climb in stages to above 40,000 feet by building up speed on the level and a slight zoom.

While the Mk IX didn’t have many of the performance refinements of later models, like the Mk VB, it served it’s purpose admirably and proved to be an effective counter to the Fw 190s.

This wonderfully detailed model kit from Eduard Models is definitely one for more advanced model makers – with over 400 parts and a hefty price tag, it’s quite the investment. However, you do get a classic model that will have pride of place in any collection.

The Mk IX was updated frequently during its service, but only when the model was fitted with an upgraded Merlin engine it warranted a new mark number – this was the Mk XVI. While some models were produced with normal wings, most models had clipped wings which provided a higher speed and better roll rate, making it ideal for low altitude missions.

The Mk XVI entered the Second World War later, first being produced in November 1944 and production continued until the end of the war, with over 1000 units produced. As the war neared the end, the Mk XVI was regularly used on bombing runs against V2 rocket sites and airfields.

This model kit is a great replica of one of the few surviving marks of Spitfire, making it a great addition to any collection. 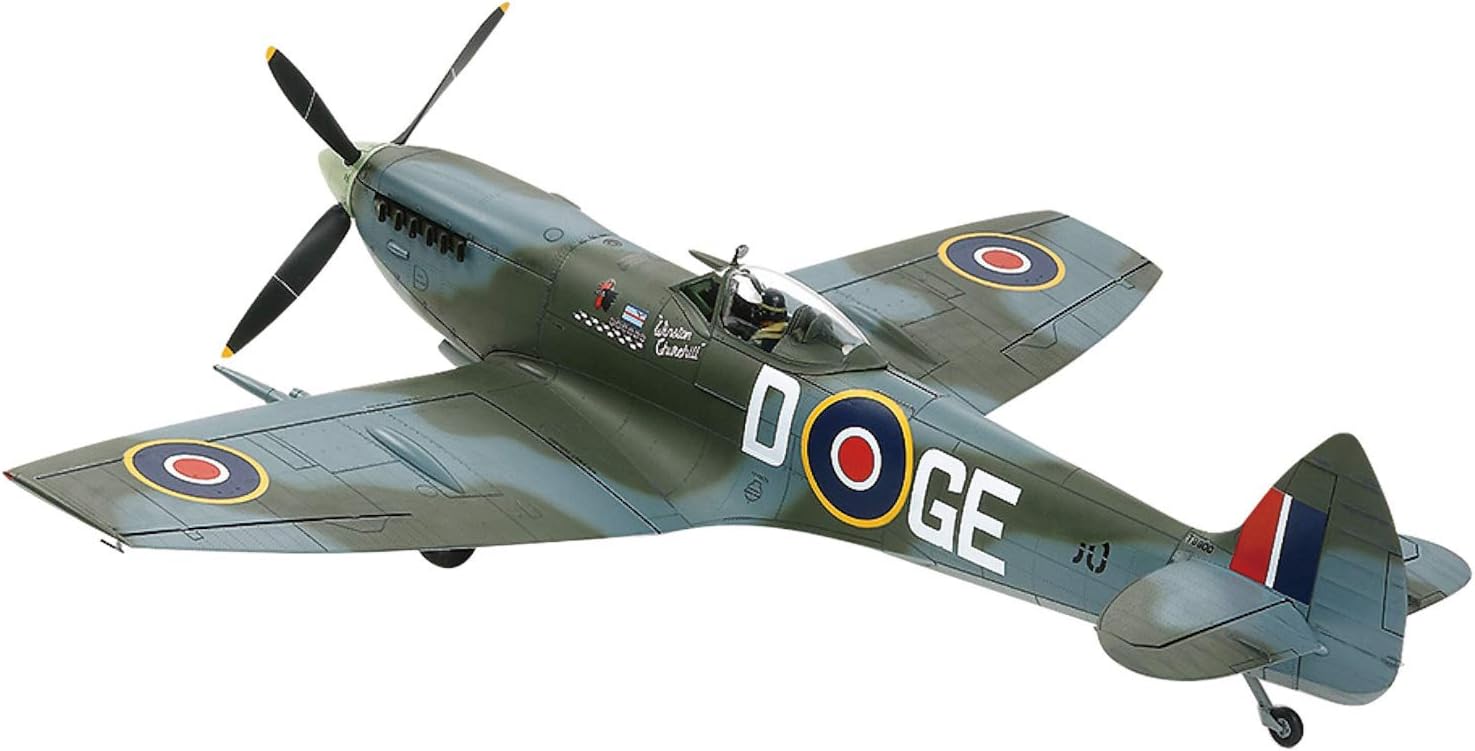 More complicated model kits can perhaps be a bit off-putting for younger model builders, so this kit from Airfix is a fantastic choice. It makes a great gift or stocking filler for Christmas!

Unlike other model kits, you don’t need to glue the parts together or paint them – they’re simple blocks that can be clicked together (similar to Lego sets), which makes it ideal for children (although you should supervise the use of the kit with younger children as there are a number of small parts).

The result is a great model of a classic aircraft that may very well inspire a new hobby in the younger generation! 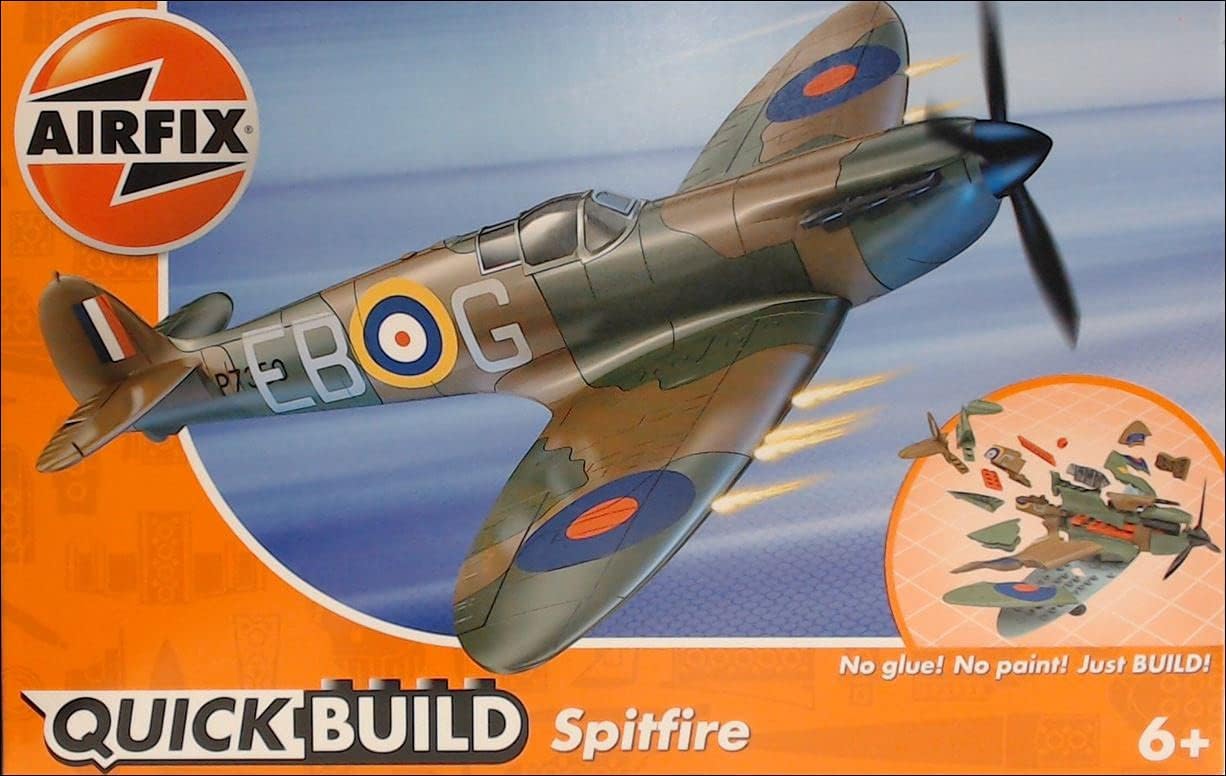 This is another great Spitfire gift that can make a great project for the family to complete together.

Unlike plastic models which are intended to be displayed after you build them, balsa wood aircraft kits are assembled with a rubber band powered propeller, which means you can wind it up and take to the skies after you complete it.

The kit comes with everything you need to assemble (frame, tissue paper, decals) but you need to purchase paints separately if you want to paint it. 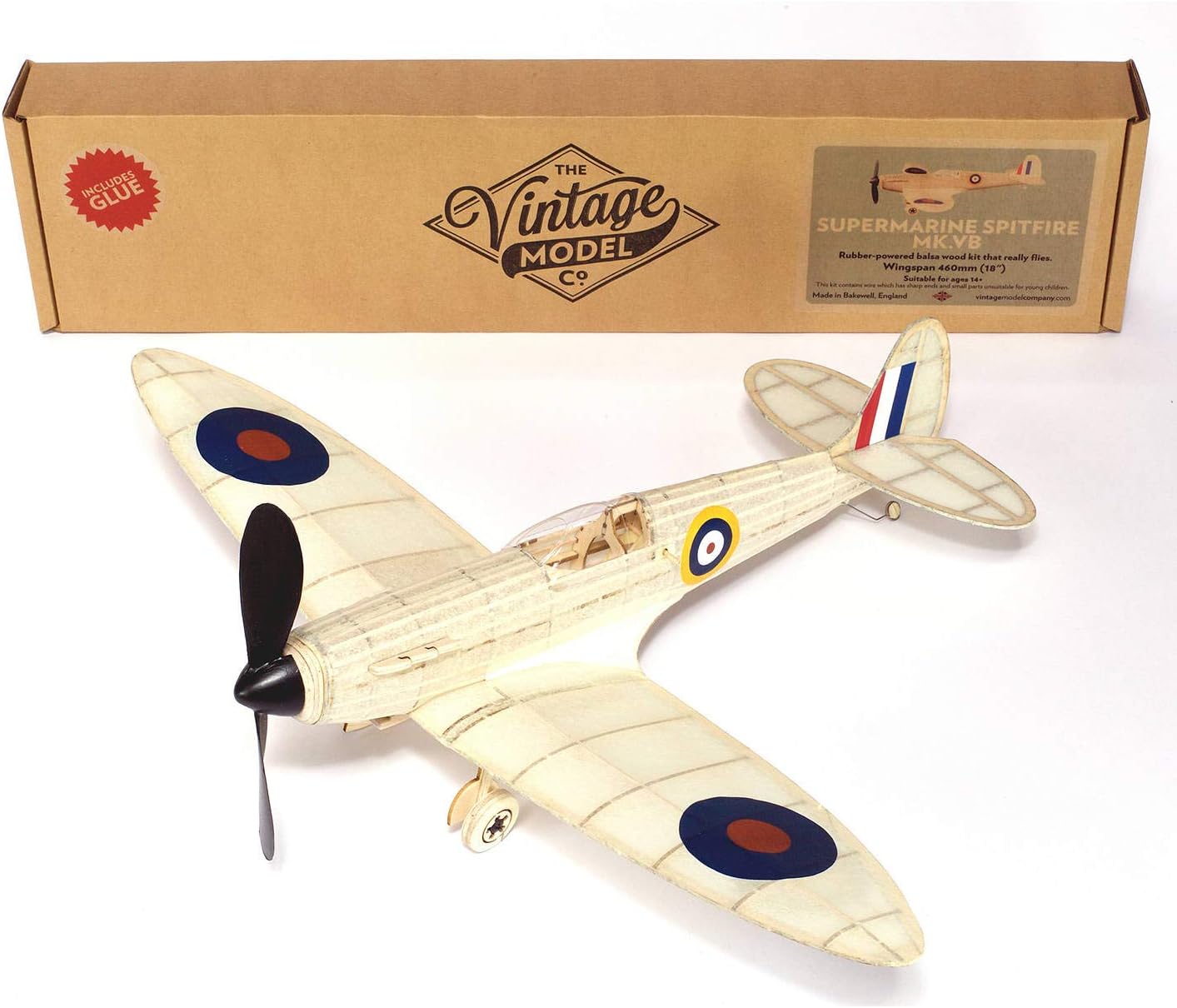